This news is classified in: Aviation Engines / Power / Fuel MRO 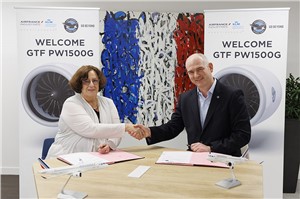 Pratt & Whitney announced that it will expand its global network of providers that maintain the Pratt & Whitney GTF™ engine to include AFI KLM E&M. The facility will serve PW1500G engines for the Airbus A220 with full disassembly, assembly and test capability. The announcement was recognized at an in-person signing ceremony at Air France-KLM Group headquarters in Paris.

With more than 10,000 engine orders and commitments from more than 90 customers, GTF engines now power more than 1,300 aircraft with 62 operators across three aircraft families. To keep pace with the growing fleet, the GTF MRO network continues to expand around the globe.

“Air France received their first A220-300 aircraft in September of 2021, and today we are excited to welcome AFI KLM E&M to our distinguished network of shops. Their experience as an operator and established MRO provider will be a strong asset in providing world-class maintenance services to the growing GTF fleet,” said Marc Meredith, executive director of GTF Engine Aftermarket at Pratt & Whitney.  “With engine orders increasing, it has become critical to expand our global MRO presence with capable, quality maintenance providers like AFI KLM E&M to ensure proximity and seamless service to our customers.”

AFI KLM E&M is the latest engine center to be announced in Europe within the GTF MRO network, alongside MTU Aero Engines and two Lufthansa Technik facilities in Germany; EME AERO in Poland; OGMA in Portugal; and SR Technics in Switzerland. Following its first induction, which is planned for first half of 2023, AFI KLM E&M’s facility in Paris will be the third facility in the region to provide PW1500G services.

“We are pleased to join the Pratt & Whitney GTF MRO network,” said Anne Brachet, executive vice president of Air France-KLM Engineering & Maintenance. “We have been providing maintenance services for more than 90 years, growing and adapting with the evolving aviation industry. Adding the Pratt & Whitney GTF engine among our capabilities strengthens our positioning on the next generation of platforms, boots our offerings to customers and furthers the technical expertise of our maintenance teams.”