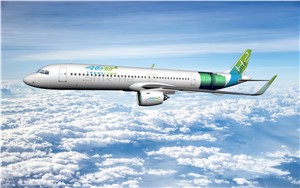 A shortage of European feedstocks for sustainable aviation fuels (SAF) will limit European aviation’s ability to reduce greenhouse gas emissions from 2035 onwards. This is one of the main conclusions of a new study by Royal NLR and Delft University of Technology. This shortage means that greenhouse gas emissions will only be 40% lower in 2050 compared to a situation with aircraft powered solely by fossil kerosene, whereas sufficient SAF availability could double this reduction.

Limited availability of European feedstocks required for producing sustainable aviation fuels is standing in the way of meeting medium and long-term uptake targets proposed by the European Commission. “Although we’ve found that feedstock availability is sufficient to meet the targets up to 2030, we have identified a substantial and increasing gap between supply and projected demand from 2035 onwards,” says Johan Kos, project manager and lead author of the study. These conclusions hold for two situations evaluated in the study. In one such situation, aircraft powered by green hydrogen are being operated from 2035 on short and medium-haul flights. In the other situation, such aircraft do not enter service, and additional SAF-powered aircraft are used instead.

Potential of new aircraft
The study is called TRANSCEND and has been carried out within the Technology Evaluator of the European Clean Sky 2 research programme and NLR’s Climate-Neutral Aviation programme, in collaboration with TU Delft. TRANSCEND, which started in 2019 and recently concluded, investigated novel propulsion technologies and alternative fuels for aviation through to 2050, as potential key contributors to climate-neutral aviation. The study introduced hydrogen-powered aircraft in the segments for up to 300 passengers on flights of up to approximately 3700 kilometres. By 2050, this introduction has the potential to reduce global aviation in-flight CO2 emissions by 16 to 20% compared to the situation of only SAF-powered aircraft in the same traffic scenario. Total well-to-wake energy[1] use and fuel costs for airlines would also be lower with hydrogen-powered aircraft than in the situation with only SAF-powered aircraft.

Climate effects other than CO2 emissions, such as the impact of water vapour and soot, were not studied. “The full contribution to global warming is significantly higher than just CO2 emissions alone,” says Herma LAAMA-De Walle, the programme manager for Climate-Neutral Aviation. “We therefore recommend that such studies are conducted in the near future,” adds Kos, “to make a more comprehensive assessment of the potential contribution of hydrogen-powered aviation and SAF to climate-neutral air travel.”

Efficiency improvements through innovative aircraft technology modelled in the situations with and without hydrogen-powered aircraft were kept identical to allow a fair comparison. Efficiency improvements are to be realised by advances in both aircraft and engine technology, requiring research and development effort from the aerospace industry. Moreover, authorities should put the necessary regulations in place to certify and use hydrogen-powered aircraft in commercial operation. “Given the need for regulatory certainty and aircraft and infrastructure development timelines, this needs to be completed within the next five years,” stresses Kos.

In the aforementioned cases studied by TRANSCEND, net CO2 equivalent emissions will be reduced by only 40% in 2050. This is compared to a reference scenario that does include efficiency improvements through innovative aircraft and propulsion technology, but considers these aircraft to be solely powered by fossil kerosene.

Balance between supply and demand
In view of the shortage in European feedstock for the production and supply of SAF, TRANSCEND recommends that policymakers and industry parties should ensure a sufficient supply of sustainable biomass, waste and renewable electricity to be used as feedstocks for producing green hydrogen and SAF. Furthermore, the researchers explicitly suggest that policymakers, universities and research centres should periodically monitor and reassess certain key variables that influence the balance between supply and demand. “Examples would be the energy efficiency of future aircraft, traffic development and associated fuel demand, availability of sustainable bio-feedstocks and waste feedstocks and renewable electricity, and green hydrogen and SAF production facilities,” says Kos. “As scaling up the feedstock and fuel production can’t be done from one day to the next, it’s crucial to identify any mismatches between supply and demand well in advance, so that they can be acted upon in good time to safeguard aviation’s contribution to climate neutrality.”