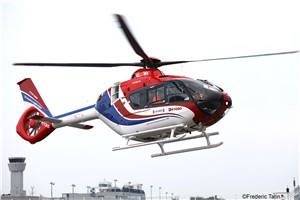 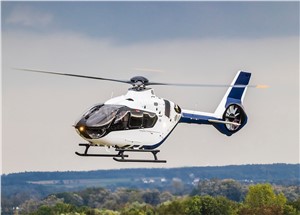 Since the delivery of the country’s first H135 to Toho Air Service in April 1997 for electronic news gathering (ENG) activities, Japanese operators across the country have been tapping into Airbus Helicopters’ H135 operational excellence for a variety of missions spanning utility, emergency medical services, law enforcement, media broadcasting, passenger transportation, and training.

Most recently, Airbus Helicopters delivered Japan’s 100th H135 to Mainichi Newspapers on  24 September 2022, marking a major milestone  in the country for this outstanding rotorcraft. The new H135 will complement Mainichi Newspapers’ existing fleet of three H135 helicopters, reinforcing their missions in the southern region of Japan. The four H135 helicopters are jointly operated by Kyodo News, which covers nationwide activities.

“The H135 offers great fuel efficiency, allowing it to fly for longer, and further, benefitting our daily operations. As the aircraft is equipped with an autopilot capability, it greatly reduces the pilots’ workload,” said Mr. Fumiya Nakamura, pilot of Mainichi Newspapers.

Strong presence in EMS market with reliable operations
Japan’s need for helicopter emergency medical services (HEMS) continues to grow with operators increasingly calling on the uniquely-suited H135. Nearly 50% of the helicopters deployed nationwide for these life-saving missions are H135s, demonstrating its strong ability to outperform in this sector.

Nakanihon Air, one of the largest Japanese operators, received its 20th H135 aircraft in 2019. The company uses this fleet to perform emergency medical service (EMS) missions at 12 bases nationwide, as well as a press coverage aircraft.

“With life-saving missions and 365 days a year operations, the aircraft needs to be ready at any time. The H135's simple maintenance and parts supply system ensure it can be reliably dispatched,” said Mr. Tsuyoshi Shibata, Corporate Officer of Nakanihon Air. ”The quietness and safety of the Fenestron are also appreciated by many medical professionals during transport operations at emergency sites,” he added.

Powerline patrol for stable electricity supply in Japan
Tohoku Air Service (TAS) has been operating Airbus Helicopters aircraft since the company was established over 30 years ago. The H135 helps patrol power lines in order to ensure a stable and reliable supply of electricity.

“We have been operating the H135 since 2008 and schedule 1,000 flight hours per year with our current three aircraft,” explains Mr. Shota Ebisu, Mechanic at TAS. “During the 1,000 flight hours, the H135 requires less inspection, therefore we can expect high aircraft availability. Also, for power line patrol missions, it requires flying in mountainous areas. The H135 provides the safety and stability in low-speed flight, ample power, and also flying with the twin engines; these are the reasons for choosing this aircraft,” he added.

Tailored for advanced training missions
Long hailed as an exceptional training helicopter, the H135 is also being deployed in Japan for ab-initio training by the Japan Maritime Self-Defense Force (JMSDF). The JMSDF, based in Kanoya-city, Kagoshima prefecture, has been operating 15 H135 helicopters for ab-initio training since 2010 – a rigorous mission that depends on very high availability.

The TH-135 is a variant of Airbus Helicopters’ light twin-engine EC135 T2+ which has been customised for JMSDF. Tailored for advanced training missions, the H135 is well adapted for aircrews of defense forces operating new-generation multi-role or combat helicopters. Japan was one of the first countries in Asia to acquire the TH-135 variant for its training.

Since 2016, JMSDF has also benefited from HCare for reliable parts supply and maintenance management, helping the agency to efficiently control costs, simplify its operational requirements and enhance aircraft availability. Thanks to this, JMSDF is now able to maintain the pilot training schedule “with higher fleet availability than before.”