This news is classified in: Aviation Supersonic Transport 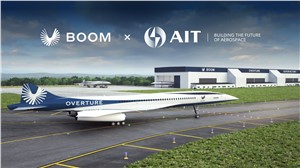 Boom Supersonic, the company building the world’s fastest airliner, optimized for speed, safety, and sustainability, today announced that it has selected Advanced Integration Technology (AIT) as the tooling and automation provider and integrator for the Overture final assembly line. This strategic partnership is an important prerequisite for aircraft production at the Overture Superfactory in Greensboro, North Carolina. Site preparation at the Superfactory is already underway, and groundbreaking is on track for December 2022.

Boom’s purchase agreement with AIT spans the design, fabrication, and installation of custom tooling for the Overture Superfactory. AIT will provide an end-to-end system for the Superfactory, creating transportation and positioning tools for fuselage assembly, wing assembly, wing-to-fuselage joining, and final assembly. Major hardware provided by AIT will include automated drilling machinery, mobile transport equipment, and setups for positioning and joining setups. Boom is prioritizing design and procurement of long-lead-time sections of the tooling suite, helping to ensure that the Overture program remains on track to enter production in 2024.

Overture will carry passengers at twice the speed of today’s fastest passenger jets. As the company announced in January, 2022, Boom will hire more than 2,400 workers at the Superfactory over the next ten years, and recruiting is already underway. Boom also pledged to create over 200 internships for students in North Carolina universities, community colleges, and trade schools, and the first class of these interns is expected in 2023.

Last week, Boom announced an offtake agreement with AIR COMPANY to purchase up to 5 million gallons of sustainable aviation fuel (SAF) per year through the duration of Overture flight testing in Greensboro, North Carolina.

Boom also recently announced three tier-one suppliers that will contribute to key systems on Overture including Collins Aerospace, Safran Landing Systems, and Eaton. Boom is in advanced supplier conversations for several other major components of the aircraft, and also plans to announce its engine partner later this year. In August, American Airlines placed deposits on 20 Overture aircraft and pre-ordered an additional 40, bringing Overture’s order book to $26 billion including orders and options.