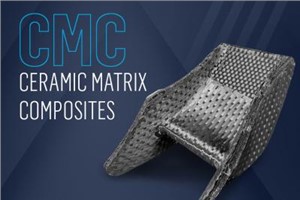 Looking for the next cool idea in sustainable aviation? Andy Lazur and his team may have just the thing. Only it’s designed to run hot.

Lazur is the general manager of Pratt & Whitney’s research facility in Carlsbad, California, where the hottest things going are ceramic matrix composites, or CMCs. These revolutionary materials, comprising hundreds of thousands of fibers no thicker than one-tenth the diameter of a human hair, potentially offer huge benefits to components operating in the fierce heat of engines’ hot section. They also stand to extend those parts’ expected life span and boost fuel efficiency.

CMCs will also play a key role in reducing emissions and extending on-wing time for both military and commercial engines, said Lazur. It’s another step forward in the commitment of Pratt & Whitney, a Raytheon Technologies business, to create a more sustainable global aviation industry.

“Everybody’s looking at the climate crisis,” said Lazur, who joined Pratt & Whitney in 2017 and was appointed the Carlsbad site manager in 2019. “Rethinking aviation is part of our responsibility. We can be more responsible in terms of how much carbon we release into the environment.”

And the environmental impact goes beyond fuel efficiency, said Lazur.

“Let’s say a part can last 10,000 hours before replacement,” said Lazur. “If we can double that interval, it will reduce airline operating costs. If you can make a part last two or three years longer than metal parts, that also means less (discarded) material in the waste stream.”

The approach isn’t entirely new; carbon-carbon, a material related to CMCs, has existed since the 1970s and has been used by Collins Aerospace, another Raytheon Technologies business, to reduce weight, increase operating temperatures and improve durability. Pratt & Whitney is now focused on similar uses for CMCs in aviation engines – an idea supported by Pratt & Whitney’s research and development team.

The primary ceramic in Pratt & Whitney’s CMC is silicon carbide, a compound produced by the combination of one carbon atom and one silicon atom. Silicon carbide is very strong and maintains its strength at higher temperatures than metals. Silicon and carbon are both abundant on Earth, so there is potential for reducing material costs in the future. Once combined, the new material can absorb more heat and energy and offers more durability at lower total weights than traditional metals-based materials, such as nickel superalloys commonly used in aviation.

The tiny fibers used in CMCs are coated with a different ceramic material, which isolates fibers from cracks that can form in high-stress areas. This fiber coating is key to producing a ceramic that is much tougher than traditional ceramics – a key attribute for application in aircraft engines. CMC components are coated with an Environmental Barrier Coatings (EBC) that are also composed of ceramic materials. The coating is essential to protect the CMC structural component in the high-temperature combustion environment. Component failures are unacceptable and lengthy downtime for maintenance can be both highly disruptive and costly to customers’ operations, said Lazur.

Beyond its R&D work, Lazur noted, the Carlsbad facility also serves as a test lab for Pratt & Whitney’s pursuit of a more sustainable workplace. For example, he explained, the Carlsbad location is developing an on-site heat reclamation system and pursuing on-site power generation to reduce its carbon footprint. The center employs 18 people and plans to expand to 60 by the end of 2023.

“It’s a beautiful time to be at Pratt & Whitney,” said Lazur. “The question we must constantly ask ourselves is not only how do we make this technology, but how do we do it in a much more sustainable way?”