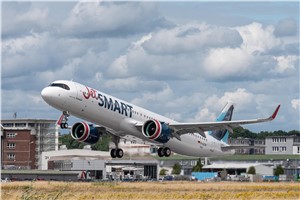 “The delivery of our first A321neo marks the beginning of a new era for JetSMART, supporting our vision to serve 100 million passengers by 2028. It is also and it is an important step in becoming the leading ULCC in South America. We worked with Airbus to configure our A321neo as the most competitive aircraft in the market, while maintaining  our focus on sustainability and ultra low fares," said Estuardo Ortiz, CEO JetSMART.

“The A321neo’s performance and efficiency will allow JetSMART to continue offering low fares, while reducing its carbon footprint,” said Arturo Barreira, President of Airbus Latin America and the Caribbean.

JetSMART’s A321neo is powered by Pratt & Whitney GTF™ engines and can seat up to 240 passengers in Airbus’ award-winning Airspace cabin, which brings unique lighting displays, more personal space and a sleek design to improve passenger experience.

The A321neo incorporates new generation engines and Sharklets, which together deliver more than 20 percent fuel and CO2 savings, as well as a 50 percent noise reduction. To date the A321neo has captured more than 8,100 orders received from over 130 customers.

In Latin America and the Caribbean, Airbus has sold over 1,100 aircraft and has a backlog of over 500, with more than 700 in operation throughout the region, representing almost 60 percent market share of the in-service fleet. Since 1994, Airbus has secured approximately 70 percent of net orders in the region.

Tell a friend:
JetSMART Takes Delivery of its 1st A321neo