Vallair and UUDS Group, in Partnership With Regio Lease & De

"Reversible, reconfigurable, fast and low-cost - this is a game-changer for the air cargo industry," Gregoire Lebigot, CEO & President, Vallair. 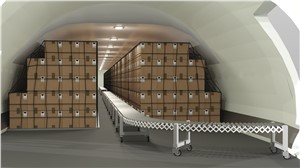 Vallair, the mature asset specialist, unveils the first ever E Class widebody freighter conversion capability at its brand new state-of-the-art mega hangar in Châteauroux, France. Designed to bridge the gap while operators currently wait five years or more for full freighter conversion slots, this innovative solution is the result of a joint investment between France-based companies Vallair and UUDS, which is Part 21 certified.

Grégoire Lebigot, Founder, President & CEO of Vallair, explains the importance of the programme and what it means for operators, particularly those involved with e-commerce.  “Innovation is and has always been integral to Vallair’s DNA. Turning the Airbus A330-300 upper deck into a cargo area without installing the large cargo door means that the conversion cost will be just a quarter of the cost compared to a conversion with one. Turnaround time will be just around one month instead of six – so the benefits are clear to see. Also, it is the very first “made in France” cargo conversion programme for a widebody aircraft, and Vallair is proud to spearhead this efficient, industry-leading process as part of its re-industrialisation of aviation in the region.”

Vallair’s E Class solution means that loading is not done on pallets or containers but uses a conveyor  that fits inside the cargo hold to efficiently load and distribute individual parcels instead. This proven concept expedites the process and reduces turnaround times considerably.

“This solution addresses current market needs and increases the value of the asset because it is completely reversible should the market change” adds Lebigot.  “The aircraft can easily be converted back to PAX configuration, or transformed into a freighter with a large cargo door in future.  It is a complementary alternative solution to the traditional freighter conversion, not a replacement.”

Vallair believes that the industry will view this as a sustainable option that will keep the assets flying for longer.  EASA approval using a Supplemental Type Certificate is expected within the next two months.

Gilles Negre, Founder & CEO of UUDS explains the importance of reversible design, “Flexibility in aircraft cabin and cargo configuration has always been a key factor for successful aviation operations and revenue optimisation. Our quick change and reversible solution brings this versatility to operators and gives them additional revenue generating options. It also offers lessors alternative solutions to boost their aircraft utilisation and life expectancy. Return-on-investment is improved and asset value is increased.”

Vallair’s new hangar in Châteauroux is an important catalyst for the Airbus A330-300 E Class conversion. The hangar itself can accommodate two Airbus A330 aircraft, or one Airbus A330 and up to three Airbus A321s at any one time, which means that Vallair now has the ability to perform both wide and narrowbody maintenance, and offer a ‘Swiss-knife’ approach with tailored solutions using all of its capabilities on site.  This includes maintenance, paint, engine shop, aerostructure repairs, conversion, teardown and component support.

Airbus A330 cargo conversions are extremely popular as airlines are using the aircraft to expand into new markets and fly longer routes, it delivers best-in-class capability and greater fuel efficiency. The first two Deucalion Aviation Limited managed Airbus A330-300 aircraft are already in Châteauroux and are scheduled to undertake the E Class conversion at Vallair which will offer around 60 tonnes of payload and a range of approximately 4,200nm.

Jonathan Skirrow – Deucalion Aviation Limited co-CEO and Chief Operating Officer says, “We are excited to work with both Vallair and UUDS, known for their engineering excellence, on this innovative and cost effective project. The widebody freighter market outlook offers opportunities for proven platforms such as mid-life Airbus A330 aircraft to continue operations for many years to come.”

France-based Regio Lease is the associated CAMO partner, while Deucalion Aviation Limited is the asset manager of the first two aircraft to be converted into E-class configuration. These recognised experts reinforce the credibility and practicality of the E Class conversion.

“Alongside our partners, UUDS, Deucalion Aviation Limited and Regio Lease, we’re now on our way to creating an Airbus A330 centre of excellence in the heart of France” concludes Lebigot.