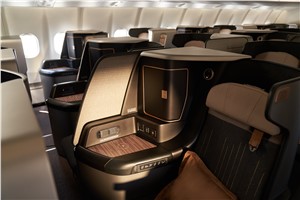 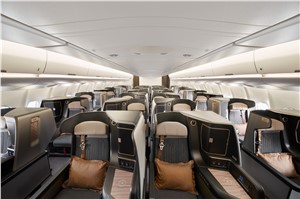 Taipei-based STARLUX Airlines has just completed its first flight with an Airbus A330neo equipped with Safran Seats' Skylounge Core business-class seats. STARLUX Airlines is the launch customer for this seat.

The first of the eight Airbus A330neo aircraft ordered by STARLUX Airlines was delivered on 18 February 2022.  These aircraft are equipped with 28 Skylounge Core seats, specifically designed for long-haul aircraft such as the Airbus A330neo or Boeing 787.

The Skylounge Core seat is made in France, and provides the best Business Class features for an unrivalled consumer experience: direct access to the aisle, fully flat bed, comfortable living space and high privacy levels, featuring specific STARLUX modules. Its modular design means that the seat can be customized to suit the airline's wishes. Significant work was done in collaboration with the STARLUX and Design Works BMW teams on the seat design to customize it to the company's colors.

"We are delighted to work with Safran to build our A330neo Business class seats, which will be one of the significant elements for STARLUX Airlines to provide its premium in-flight service." Steve Huang, Chief Procurement Officer of STARLUX Airlines, said.

Vincent Mascré, CEO of Safran Seats, states: "We are proud to provide STARLUX with a product that offers the latest market standards, developed in record time thanks to its modularity, which enables high seat customization and shortened development times."