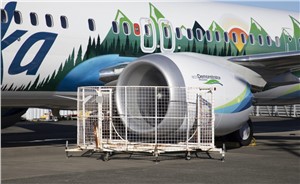 Currently, SAF approved for use is a blend of petroleum-based Jet A or Jet A-1 fuel and a SAF component with a maximum blend limit of 50%. ASTM International, an organization that develops technical standards, has not yet qualified 100% SAF. One of GE’s fuel experts chairs an international task force to develop standardized industry specifications supporting adoption of 100% drop-in SAF, which does not require blending with conventional jet fuel.

“As our testing shows, the Passport engine, like all GE engines, can operate on approved Sustainable Aviation Fuel today and in the future. Our customers can be confident that the Passportengine can help meet their sustainability goals to reduce CO2 emissions in flight, thanks to the Passport’s more fuel-efficient technologies compared to previous-generation business jet engines and ability to operate on lower-carbon fuels,” said Melvyn Heard, president of the Passport engine program for GE Aviation.

Ground testing was conducted with one engine over several days in March at GE Aviation’s Peebles Test Operations in southern Ohio. The purpose of the test was to assess the performance and operability of the engine technology with 100% SAF compared to conventional Jet A.

The type of SAF used in the testing, HEFA-SPK*, is the most widely available SAF today and can be made from cooking oil and other waste fats, oils and greases. Preliminary test results of the Passport engine are favorable, with the engine performing similarly to when it runs on petroleum-based jet fuel.

GE Aviation has been actively involved in assessing and qualifying SAF since 2007 and works closely with producers, regulators, and operators to help ensure SAF can be widely adopted for use in aviation. SAF can be made from plant-based material, fats, oils and greases, alcohols, waste streams, captured CO2, and other alternative feedstocks. The use of alternative feedstocks and processes reduces lifecycle CO2 emissions during production, processing, and distribution compared to fossil-based fuels.

This is the latest in a series of 100% SAF tests by GE and CFM International, a 50-50 joint company between GE and Safran Aircraft Engines: