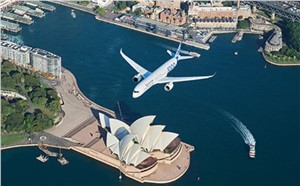 Australian airline Qantas has committed to a deal for 12 Trent XWB-97 powered Airbus A350-1000s that will support its ambitions to operate the world’s longest commercial non-stop flights, allowing passengers to fly direct between London or New York to the Australian eastcoast cities of Sydney and Melbourne.

Rolls-Royce and Qantas have also committed to sign a TotalCare® service agreement for the Trent XWB-97 engines that will power the 12 aircraft, providing the airline with predictability and reliability for the services and maintentance of the new fleet.

Ewen McDonald, Chief Customer Officer, Rolls-Royce Civil Aerospace, said: “We have been powering Qantas aircraft for more than 40 years and we are delighted to be making more history with Qantas on Project Sunrise. This project is closely aligned with our company’s passion for pioneering new innovation and achieving industry firsts. Our Trent XWB engine already has a pedigree in powering ultra long-haul flights and doing so with the maximum efficiency and reliability.”

The Trent XWB-97 is the world’s most efficient large aero engine in service today, delivering a 15 per cent fuel consumption advantage over the first Trent engine, enabling our airlines to fly further on less fuel. It is also ready to operate on Sustainable Aviation Fuels (SAFs) as they become more available to airlines in the future – this is in line with our commitment to proving all Trent engines are compatible with 100% SAF by 2023. In addition, through industry leading engine efficiency the Trent XWB has contributed to avoiding more than 10 million tonnes of CO2 since it launched in 2015.

As well as offering improved efficiency, the Trent XWB delivers a step change in out-of-the-box maturity and reliability for the industry, consistently achieving better than 99.9% dispatch reliability.

Following its entry into service in 2015, the Trent XWB, which exclusively powers the Airbus A350, quickly became the fastest selling large engine of all time. It has now achieved more than eight million engine flying hours in service with more than 30 operators, demonstrating its versatility and capability by flying a range of different routes, from short-range segments to ultra-long-range flights of around 18 hours.