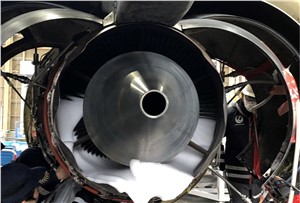 GE’s 360 Foam Wash is an alternative to the water wash method. It can help restore engine performance leading to reduced fuel consumption and improved time on wing. The process involves injecting a specially-formulated, proprietary solution that reduces build-up of deposits in the engine, which can lower engine exhaust temperatures and improve engine compressor efficiency.

Estimates are that 360 Foam Wash has the potential to save Japan Airlines up to 82,000 liters of fuel and save up to 285 metric tons of carbon emissions a year by replacing some water washes with foam wash for CF34 engine cleaning.

“GE’s 360 Foam Wash system helps us to reduce CO2 emissions. This system is part of Japan Airline’s ESG management, where we look to maintain the airplane in a way to reduce the impact on the environment. We aim to realize an affluent society where each of us can sense and hope for a brighter future,” said Ryo Tamura, senior vice president of Japan Airlines Engineering & Maintenance.

GE’s 360 Foam Wash system is self-contained, allowing it to be used inside maintenance hangars and outdoors. GE’s 360 Foam Wash is approved for use on multiple GE engine programs, including models of GE90, GEnx, CF34 and CF6.

GE Aviation is rising to the challenge of building a world that works with industry-leading technology and innovation, such as 360 Foam Wash. GE Aviation is already developing next-generation technologies to achieve greater fuel efficiency and reduced CO2 emissions for the future of flight with an ambition to be a net-zero company by 2050, encompassing Scope 3 emissions from the use of our sold products.

All GE Aviation engines—including CF34 engines—can operate with approved SAF, which is made from plant oils, algae, greases, fats, waste streams, alcohols, sugars, captured CO2, and other alternative feedstock sources. By starting with alternative feedstocks instead of fossil fuels, CO2 emissions can be reduced during production.