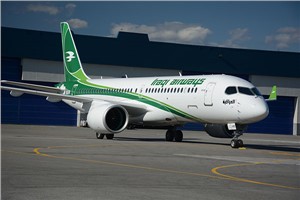 Pratt & Whitney announced today that Iraqi Airways has taken delivery of its first Airbus A220-300 aircraft, powered exclusively by Pratt & Whitney GTF™ engines. The airline ordered five such aircraft in 2013.

“We would like to welcome Iraqi Airways back to the Pratt & Whitney family,” said Rick Deurloo, chief commercial officer at Pratt & Whitney. “Our relationship with Iraqi Airways dates to their Boeing 707 fleet, which was powered by our JT3D engines. We look forward to supporting the airline’s growth with the world-class operating costs and environmental advantages that come with our revolutionary GTF engines.”