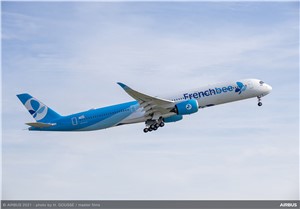 French bee, the low-cost, long-haul airline (Groupe Dubreuil member) based in France, has taken delivery of its first A350-1000, on lease from Air Lease Corporation (NYSE: AL), to join its fleet and make the airline an all-A350 fleet operator. The aircraft is the first of two A350-1000s to be operated by the carrier on route from Paris to Saint Denis de La Reunion Island in the Indian Ocean.

The A350-1000s will complement the four A350-900 aircraft already in the French bee fleet, providing the airline with unrivalled operational flexibility and eco-efficient solutions for its network.

The aircraft features 480 seats in a two-class layout (40 premium class and 440 economy class), providing all the comfort and amenities of Airbus’ Airspace cabin, including state-of-the-art, in-flight passenger entertainment (IFE) and full WiFi connectivity throughout the cabin. The A350 cabin is also the quietest of any twin-aisle aircraft.

The A350-1000, Airbus’ largest widebody in the twin-engine category, features the latest aerodynamic design, a carbon fibre fuselage and wings, plus new fuel-efficient Rolls-Royce Trent XWB-97 engines, allowing the airline to fly long-haul destinations up to 16,000 km (8,700nm).
Together, these elements translate into unrivalled levels of operational efficiency with 25% less fuel burn and CO2 emissions and 50% reduction in noise.

Simultaneously, the Dubreuil group also takes delivery of another A350-1000 on lease from Air Lease Corporation (NYSE: AL) intended for Air Caraïbes, bringing the number of Airbus aircraft in the group's fleet to 15.