Regent Craft Inc, Announces the Launch of the World's First Seaglider, an Electric Flying Machine Set to Transport Passengers Along Coastal Routes by 2025 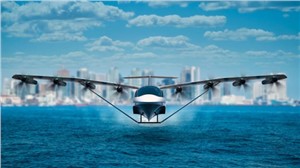 REGENT is proud to announce the launch of their new all-electric vehicle, the seaglider, which flies along coastal routes operated by airlines, ferry companies, and governments.

REGENT’s all-electric flying machine combines the speed, comfort, and navigation systems of an aircraft with the convenience, maneuverability, and affordability of a boat. It will be able to transport commercial passengers and critical cargo with a range of 180 miles at a speed of 180 mph leveraging existing dock infrastructure.

REGENT’s seaglider operates in a variety of modes, enabling safe operations across a diverse set of environments. After departing a dock, the vehicle initially operates at low speeds (20-45mph) on a hydrofoil offering comfortable, wave-tolerant sailing as it leaves crowded city harbors. Upon reaching open water, the vehicle takes off and accelerates to high speeds (45 - 180 mph) staying within one wingspan of the water’s surface. Flight safety at these low altitudes is achieved utilizing a multiply-redundant, state-of-the-art navigation and control system.

Similar to a hovercraft, seagliders fly on a dynamic air cushion created by the pressurized air between the wings and the water. The aerodynamic advantage of this so-called “ground effect,” combined with operational efficiencies of always being a few feet away from a safe landing, give seagliders double the range of an electric aircraft.

Mr. Cuban, who was the first investor in billion-dollar rocket manufacturer Relativity Space, said, “The efficiency of coastal transportation will be 100x greater with REGENT. There is no other way to describe it. The idea of having to get between 2 coastal points is always stress inducing. Regent changes all that and makes it fast and easy. REGENT will give people a step-change improvement in transportation. Passengers will spend less time in transit and more time with their families.”

REGENT has received $465M in provisional orders from some of the world’s largest airlines and ferry companies. Aircraft operators are excited because seagliders are half the operating cost of aircraft, and ferry operators are excited because the seagliders are six times faster. For all customers, REGENT enables faster door-to-door times and a complete elimination of emissions.

The founders, Billy Thalheimer and Mike Klinker, worked together while both studying aerospace engineering at MIT as well as during their time at Aurora Flight Sciences and Boeing. Billy brings his experience leading strategy and execution across future mobility verticals including test flight, future product design, and component development to REGENT as its CEO. Mike has built and written control software for over a dozen aircraft, and brings his advanced flight controls and abundant flight test experience to REGENT as its CTO.

Tell a friend:
Regent Craft Inc, Announces the Launch of the World's First Seaglider, an Electric Flying Machine Set to Transport Passengers Along Coastal Routes by 2025