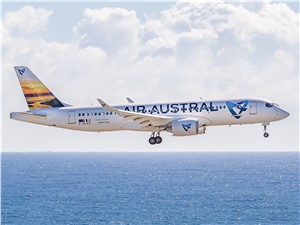 Pratt & Whitney and Air Austral, based in Réunion, celebrated the entry into service of the airline’s first Airbus A220-300 aircraft powered by Pratt & Whitney GTF engines. The airline placed an order for three of such aircraft in 2019.

“We are excited to fly our first Airbus A220 with Pratt & Whitney GTF engines, becoming the first French operator to fly this type of aircraft,” said Marie-Joseph Male, CEO for Air Austral. “This game-changing engine and aircraft combination will deliver superior economics to develop our network, quiet flights for our passengers, and low fuel burn and emissions for our environment. We look forward to flying this aircraft for years to come.”

“We are honored to extend our relationship with Air Austral,” said Rick Deurloo, chief commercial officer and senior vice president at Pratt & Whitney. “We look forward to supporting them with the GTF-powered A220 as they return to growth, add frequencies and expand their network.”