Flying Where No Cars Go 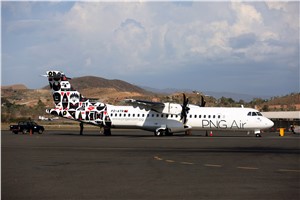 Commercial and charter operator PNG Air is continuing to operate domestically, despite the impact of COVID-19 on air travel, because in Papua New Guinea domestic air services are often the only viable means of transportation.

Kalipa says the airline is continuing to receive requests from local governments to fly to more airstrips in remote parts of the country. PNG Air will continue to consider opening routes to new destinations, but the airline does need to do risk assessments of these airstrips, he says. The airline relies on local authorities to develop and maintain the airstrips.

Many people in Papua New Guinea fly to the smaller towns to visit family and friends or collect fresh produce and then fly to Port Moresby and large towns to gain access to higher education and specialist medical care, says Kalipa.

PNG Air has also been helping in the fight against COVID-19.

“We have been transporting personal protective equipment, medicine, test kits and pathology samples throughout the country. We’ve also transported defense force personnel who are helping to prevent the spread of the virus at our borders with Indonesia, Solomon Islands and Australia. This is important because Papua New Guinea has numerous traditional border crossings,” Kalipa says.

PNG Air has been called on to help because air travel is the only practical way to access remote places, Kalipa says. The airline, for example, is the only scheduled operator serving the southeastern islands of Misima and Kiriwina, he adds.

“We fly mostly short hauls so we get a big advantage from the turboprop’s fuel efficiency,” says Kalipa.

“Pratt & Whitney’s engines – the PW120 on the Dash 8 and the PW127 on the ATR have great dispatch reliability. They’ve been easy to maintain and also easy to manage, because they’re a ‘series engine’. Our engineers’ licenses cover both the PW127 and PW120,” says Kalipa, adding that PNG Air uses the engine data for predictive maintenance. “We download the data for engine condition trend monitoring.”

PNG Air is an airline with its headquarters and main operating base in Port Moresby, Papua New Guinea. It operates scheduled domestic and international flights, as well as contract corporate charter work.

Tell a friend:
Flying Where No Cars Go