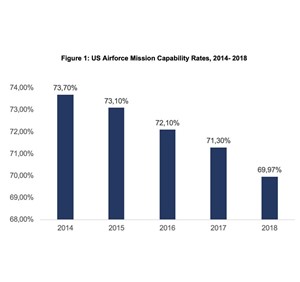 US is one of the largest defense spenders in the world, it accounts to around 50% of the Global defense spending. It is also one of the most technologically advanced defense forces in the world. Acquiring technology is a cost affair and maintaining it is even costlier. The airborne assets of the US Airforce accounted to around 5,412 units in 2018, which is around 1.2% increase in total fleet, compared to 2017. Airborne platforms are an expensive asset to procure and maintain and could easily become a liability due to delayed maintenance.

The key reasons which impact the maintenance of the aircraft are diminishing manufacturing source, unexpected replacement of parts and delays in depot maintenance. In case of F-16s, that account to around 17% of the US Air Force fleet, the delay was accounted towards delay in acquiring replacement aircraft. It was recently reported the full mission capability of F-35 was only 27% due to shortage of parts.

A major portion of this delay can be attributed towards lack of maintenance capability prior mass purchase of F-35. In 2017, one of the government documents reported that the capabilities to repair F-35 parts at military depots were 6 years behind schedule, which resulted in average part repair times of 172 days, which is twice that of the program’s objective. All these factors contribute to the lack of mission capable rate of the overall fleet, the follow figure represents the steady decrease in mission capable rates over the past few years.

The diminishing suppliers have acted as a major challenge towards availability of spare components. This led to the salvaging of retired aircraft, however there is an anticipated shortage in most cases or are experiencing shortage in a few cases. This has led to the US Air Force to adopt new technologies to cater to the gap in mission critical rates. The Additive Manufacturing or the 3D Printing technology is expected to drive the ambitious project of increasing the mission capability readiness of airborne assets.

A few examples of platforms with 3D installed parts are the C-5, F-22 and B-2. The Air Force Rapid Sustainment Office recently installed around 17 3D printed parts on a C-5, tail number 70035. The 3D printed parts were made from polymer and metal in less than three days. The various parts that were installed were predominantly cabin interior parts.

The replacement of titanium brackets on F-22 was another key milestone in the adoption of AM technology by US Air Force. The part was ordered and printed in about three days and helped reduce the aircraft downtime and the overall maintenance cost. The replacement of brackets were around 80% during a maintenance, the adoption of AM technology to manufacture these spares proved to be an innovative step towards driving asset optimization. It is also important to note that the titanium brackets do not corrode like it Aluminum counterpart.

The B2 stealth bomber program was estimated at around USD 45 Billion to develop around 21 aircraft. The low volumes makes it unviable for any manufacturer to reach scales of economy. These challenges paved the way for the inhouse team to turn towards AM for manufacturing such components. The Air Force Life Cycle Management Center decide to produce a permanent cover to prevent accidental activation of AMAD switch. The inhouse production of 20 protective covers resulted in a total spending of around USD 4000, which is considered as a great saving on cost and time. The component is currently in its air worthiness testing phase and is expected to be installed in the aircraft by 2021.

The adoption of Additive Manufacturing is poised to increase the asset optimization of the platforms across the Global Defense sector. The combination of low cost and reduced complexity associated with the AM technology have acted as a key driver for higher rate of adoption. In case of US, the ageing aircraft, lack of parts and the logistics challenges are expected to drive the AM market in the defense sector. However, it is important to note that a combined effort from technology and skilled manpower is required increase the overall mission capability rates towards 80%.

Tell a friend:
Additive Manufacturing To Drive The Mission Capability of US Air Force Towards 80%