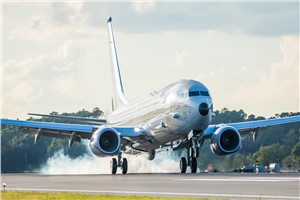 This is part of a package of assistance from the Ministry of Defence to the Home Office as they tackle small boats crossing in the Channel.

The Defence Secretary has also authorised the use of the Shadow R1 aircraft. Both the P-8 Poseidon and the Shadow R1 will provide further essential support to the UK Border Force over the coming weeks subject to weather conditions and the Border Force’s requirements.

The aircraft will track vessels and pass information to the Border Force who will then take any appropriate further action. This task was initially under-taken on Monday by an Atlas A-400M aircraft, which flew from RAF Brize Norton to provide surveillance over the Channel.

The P8 Poseidon is a multi-role maritime patrol aircraft. It is equipped with a maritime search radar and delivers a highly-sophisticated search and tracking capability. The Shadow R1 is an intelligence gathering aircraft and is equipped with Electro Optical and Infra-Red sensors.

The height at which an aircraft operates allows for a greater field of vision and can cover a larger area, making it a more effective wide-area surveillance platform than a ship doing the same task.

The Poseidon made its operational debut last week supporting the Royal Navy to track a Russian vessel close to UK waters and follows shortly after the Prime Minister’s visit to Kinloss Barracks last month. It heralds a significant development in the UK’s Maritime offensive and defensive capabilities. The P-8 offers a potent blend of tracking options and associated weapons able to find surface and sub-surface vessels, once more allowing the RAF to complete effective joint maritime operations with the Royal Navy.