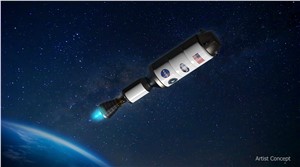 DARPA, via its Demonstration Rocket for Agile Cislunar Operations (DRACO) program, is collaborating with NASA to build a nuclear thermal rocket (NTR) engine that could expand possibilities for the space agency’s future long-duration spaceflight missions. The goal is to test an NTR-enabled spacecraft in Earth orbit during the 2027 fiscal year. An NTR presents advantages over existing propulsion technologies, such as sending cargo to a new lunar base, humans to Mars, and robotic missions even farther.

“DARPA and NASA have a long history of fruitful collaboration in advancing technologies for our respective goals, from the Saturn V rocket that took humans to the Moon for the first time to robotic servicing and refueling of satellites,” said Dr. Stefanie Tompkins, director, DARPA. “The space domain is critical to modern commerce, scientific discovery, and national security. The ability to accomplish leap-ahead advances in space technology through the DRACO nuclear thermal rocket program will be essential for more efficiently and quickly transporting material to the Moon and eventually, people to Mars.”

“NASA will work with our long-term partner, DARPA, to develop and demonstrate advanced nuclear thermal propulsion technology as soon as 2027. With the help of this new technology, astronauts could journey to and from deep space faster than ever – a major capability to prepare for crewed missions to Mars,” said NASA Administrator Bill Nelson. “Congratulations to both NASA and DARPA on this exciting investment, as we ignite the future, together.”

Nuclear thermal rockets have been built before, so DRACO has a head start. About 50 years ago, the technology was tested on the ground. DRACO is now leveraging lessons learned from past NTR reactor technology, but instead of using highly-enriched uranium, DRACO is using high-assay low-enriched uranium (HALEU) fuel to have fewer logistical hurdles on its ambitious timeline. As an added safety precaution, DARPA plans to engineer the system so that the DRACO engine’s fission reaction will turn on only once it reaches space.

Fission, the same process used for nuclear power, is the splitting of atoms. It creates high levels of heat that can turn rocket propellant such as hydrogen from a liquid to a gas phase. In the NTR, that gaseous propellant is accelerated out a converging/diverging nozzle in the exact same way as a conventional chemical rocket engine. The high performance of an NTR is enabled by the reactor passing its heat along to its rocket propellant. DRACO’s proposed solid core NTR temperatures could reach almost 5,000 degrees Fahrenheit, requiring use of advanced materials.

The U.S. Space Force has signaled its support for DRACO with the intent to provide the launch for the demonstration mission.

“We will conduct several experiments with the reactor at various power levels while in space, sending results back to operators on Earth, before executing the full-power rocket engine test remotely,” said Dodson. “These tests will inform the approach for future operation of NTR engines in space.”