Thales Alenia Space and Partners Sign Contract With ESA for

This news is classified in: Aerospace Contracts Cyber Defense / IT Communications Space 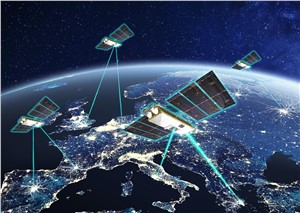 The TeQuantS project intends to develop quantum technologies for cybersecurity applications and future quantum information networks. These technologies will enable Thales Alenia Space and its partners to build satellites and optical ground stations by the end of 2026. TeQuantS will thus help to demonstrate the performance of long-distance quantum satellite links.

Satellites are today viewed as the best bet for long-distance quantum communications, as ground-based fiber-optic links directly transmitting quantum information are limited to a range of about 150 kilometers.

The main cybersecurity challenge is to generate secure cryptographic keys using the quantum properties of light and distribute them to users anywhere in the world. This capability is a response to the threat of quantum computers potentially able to crack cryptographic keys now in daily use.

The key challenge for quantum information networks is to enable future quantum computers and sensors to talk to each other and fulfill their promised exponential gains in performance.

Quantum communications are currently the focus of major research and development programs, notably the EuroQCI project in Europe.

Since 2018, Thales Alenia Space has been rolling out its roadmap to develop mature end-to-end quantum communications, notably through projects initiated by the European Commission (OPENQKD, QSAFE) and ESA (SAGA). With this roadmap, fully aligned with that of the TeQuantS project, Thales Alenia Space is focusing not only on satellites but also on ground stations and complete mission segments, leveraging its longstanding expertise as a telecommunications systems integrator and developer of optical terminals, and drawing on Thales’s two decades of experience in quantum communications.

Javier Benedicto, Acting Director of Telecommunications and Integrated Applications at ESA, said: “Supporting European autonomy, leadership and responsibility in today’s digital world is becoming increasingly important. We are proud to be working with the consortium led by Thales Alenia Space to ensure that European citizens will continue to benefit from space-based secure connectivity in everyday life on Earth.”

“We’re delighted to be working with our partners to develop quantum technologies that will demonstrate the ability to establish operational long-distance satellite quantum communications links and support Europe’s sovereignty in this area,” said Marc-Henri Serre, Thales Alenia Space Executive Vice President, Telecommunications. “We thank ESA, CNES and the Austrian Space Agency for their vital support on this project, which is addressing future cybersecurity and quantum information network challenges.”