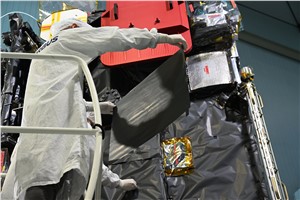 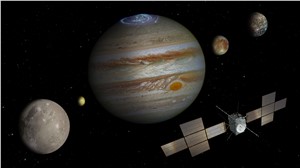 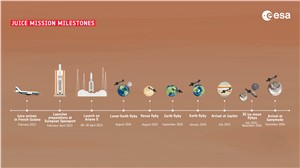 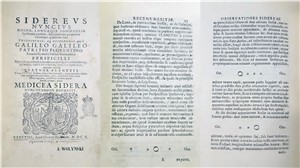 A commemorative plaque celebrating Galileo’s discovery of Jupiter’s moons has been unveiled on ESA’s Jupiter Icy Moons Explorer, Juice. The spacecraft has just completed its final tests before departing Toulouse, France, for Europe’s Spaceport to count down to an April launch.

As part of the final preparations a commemorative plaque was mounted on the spacecraft as a tribute to Italian astronomer Galileo Galilei who was the first to view Jupiter and its four largest moons through a telescope in January 1610. His observation that the moons changed position from night to night overturned the long-held idea that everything in the heavens revolved around Earth. The moons – Io, Europa, Ganymede and Callisto – were to become collectively known as the Galilean satellites in his honour.

The plaque, which replicates several pages of Galileo's Sidereus Nuncius where he describes his observations of the moons, was unveiled at Airbus Toulouse on 20 January. Following the event, the spacecraft will be packed for its transatlantic flight to French Guiana where it will be readied for launch on an Ariane 5 from Europe’s Spaceport.

“Unveiling the plaque is a beautiful moment in this intense chapter preparing the spacecraft for launch,” says Giuseppe Sarri, ESA’s Juice project manager. “It’s not only an opportunity to pause and reflect on the decades-long hard work that has gone into conceiving, building and testing the spacecraft, but also to celebrate the curiosity and wonder of everyone who’s ever gazed up at Jupiter in the night sky and pondered our origins – the inspiration behind this mission

Answering humankind’s big questions
Three of Jupiter’s largest moons – Europa, Ganymede and Callisto – hold vast quantities of water buried under their surfaces in volumes far greater than in Earth’s oceans. These planet-sized moons offer us tantalising hints that conditions for life could exist other than here on our pale blue dot, orbiting giant planets instead of hot stars. Jupiter and its family of large moons represent an archetype for giant gas planet systems across the Universe and as such are some of the most compelling destinations in our Solar System.

ESA and its international partners are almost ready to send Juice on its quest to explore this fascinating planet and intriguing moons. With its suite of powerful instruments, Juice will see Jupiter and its moons in a way that Galileo couldn’t even have dreamt of. The data returned by the spacecraft will serve many future generations of scientists determined to uncover the mysteries of the jovian system and its place in the evolution of our Solar System.

“With Juice's departure for the launch site fast approaching, we remember its long Earthly journey through various Airbus sites in Europe towards final integration and more than 500 Airbus employees who prepared the spacecraft for its eight-year cruise,” says Cyril Cavel, Juice Project Manager at Airbus Defence and Space. “It has been an incredible adventure, along with more than 80 companies across Europe, to bring ESA’s vision to life and ultimately study Jupiter and its icy moons in-depth.

A trio of milestones
Three important milestones have been concluded in the last weeks alone. In December the spacecraft completed a final thermal vacuum test needed to confirm it is ready for the harsh temperatures inflicted by the space environment.

Last week a final ‘System Validation Test’ saw the spacecraft – sitting in Toulouse –‘plugged in’ to mission control at ESA’s Space Operations Centre (ESOC) in Darmstadt, Germany, to simulate the first activities after launch when Juice’s various arrays, booms and appendages will unfold, with the final version of the flight software

Finally, and most critically, on 18 January the Qualification and Acceptance Review confirmed readiness to move forward with launch preparations at the Spaceport.

Juice will lift off on an Ariane 5 in April – the last ESA mission to fly on this launcher before Ariane 6 takes over.

Preparing for a treacherous trip
In parallel, while Juice moves to the Spaceport, a strong focus of activities remains centred at ESA's ESOC mission control centre in Germany. The flight control teams will ramp up their training for launch and early operations in a series of 16 intensive multi-day simulations.

“This is the biggest deep-space mission we've ever launched, and it needs to nimbly orbit the moons of the largest planet in the Solar System using no less than 35 flybys,” explains Andrea Accomazzo, Flight Operations Director for the mission.

“Juice's exploration of Jupiter and its moons will require us to perform a decade of operations we've never done before, and a lot could go wrong. In these weeks of simulations, we'll have every possible problem thrown at us, so that we can handle any situation in space.”

Following launch, Juice will fly an eight-year course through the Solar System, its path punctuated with gravity assists of Earth and Venus to slingshot it out to Jupiter.

Depending on the exact day it launches – and so depending on the geometry of the Solar System on that day – Juice could perform the first-ever lunar-Earth gravity assist. This would see the mission perform a flyby of the Moon and just a day later a flyby of Earth.

Once it arrives in the Jupiter system Juice will face a harsh radiation and temperature environment, hundreds of millions of kilometres from Earth, in order to gather data that will uncover the mysteries of the planet’s complex environment and ocean-bearing moons.

To fly such a complex path from such an enormous distance – and vitally, to get Juice’s data home – will require extreme navigation techniques, reliant on ESA's Estrack network of deep space antennas in Spain, Argentina and Australia, controlled remotely from ESOC.

The spacecraft, ground support equipment and personnel will arrive at the Spaceport early February for the intensive launch site preparations, culminating in launch this April.