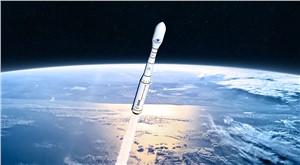 On November 29, 2022, Arianespace announced having signed with the European Commission (Directorate General for Defence, Industry and Space), a contract for the procurement of five launch services with Vega C for the Copernicus component of the European Union’s (EU) Space Programme.

“I would like to thank the European commission, especially the DG DEFIS teams, along with ESA, for continuing to entrust us with the launch of the Sentinel satellites of the Copernicus Programme,” said Stéphane Israël, CEO of Arianespace. “To support the European Union’s ambitions and to ensure its sovereign access to Space is at the heart of our mission. This signature once again demonstrates the versatility and competitiveness to the new European light launcher Vega C, which backlog is now boosted to 13 launches.”

Timo Pesonen, Director-General of DG DEFIS said: “Thanks to this new contract with Arianespace, the European Commission is securing Copernicus launches over the next six years. These launches will ensure that, with the support of ESA, the Copernicus constellation is replenished and new observation capacities are put into orbit. We look forward to this new partnership with Vega C and Arianespace, key for the implementation of the EU Space Programme”.

The Sentinel satellites included in the contract are:
Sentinel-1D , will be equiped with a Synthetic Aperture Radar (SAR) to provide all-weather ocean and land high resolution multi-purpose observations. It will round out the initial capacity offered by the preceding Sentinel-1 satellites to offer a comprehensive response to the needs for environmental and security monitoring via space-borne radar systems. The satellite, weighing around 2.3 metric tonnes, will be placed in a Sun-synchronous orbit with an altitude around 690 km. The launch is scheduled from the second half of 2024. In April 2022, Arianespace was selected for the launch of Sentinel-1C satellite, scheduled in the first half of 2023 on board Vega C. Arianespace previously launched Sentinel-1A in 2014 and -1B in 2016.

Sentinel-2C will provide high-resolution optical imagery for land services. It will monitor variability in land surface conditions, and its wide swath width and high revisit time will support monitoring of Earth’s surface changes. The satellite, weighing around 1.2 metric tonnes, will be placed in a Sun-synchronous orbit with an altitude around 780 km. The launch is scheduled for mid-2024. Arianespace previously launched Sentinel-2A in 2015 and -2B in 2017.

Sentinel- 3C will provide high-accuracy optical, radar and altimetry data for marine and land services. It measures variables such as sea-surface topography, sea- and land-surface temperature, ocean and land colours with high-end accuracy and reliability. The satellite, weighing around 1.2 metric tonnes, will be placed in a Sun-synchronous orbit with an altitude around 810 km. The launch is scheduled for 2024-2025.

Sentinel CO2M-A and CO2M-B will carry a near-infrared and shortwave-infrared spectrometer to measure atmospheric carbon dioxide produced by human activity, providing the EU with a unique and independent source of information, to assess the effectiveness of policy measures, and to track their impact towards decarbonizing Europe and meeting national emission reduction targets. The measurements from the mission will reduce current uncertainties in estimates of emissions of carbon dioxide from the combustion of fossil fuel at national and regional scales. The satellites, each weighing around 1.5 metric tonnes, will be placed in a Sun-synchronous orbit. Both launches are scheduled for 2025-2026.

Sentinel satellites are part of Copernicus, one of the flagships of the European Union Space Programme, which counts among the leading Earth Observation systems worldwide. Copernicus provides continuous, independent and reliable Earth observation data and services to public authorities, companies and citizens. It presently includes seven dedicated Sentinel satellites: Sentinel-1A radar imaging satellite, Sentinel-2A and -2B optical imaging satellites, Sentinel-3A and -3B for ocean and atmosphere monitoring; Sentinel-5P enables monitoring the quality of air, while Sentinel-6 is monitoring sea levels.

Vega C, the new European light launcher, has been specifically upgraded to launch satellites of the class of the Copernicus component and is perfectly suited to serve the Earth Observation market because of its performance and versatility. With Vega C and Ariane 6, Arianespace is able to offer the best possible solutions to orbit all kind of payloads for any range of applications.

Vega C is an ESA program carried out in cooperation between public institutions and industry across 12 European partner states. The prime contractor of Vega C, responsible for delivering to Arianespace a launcher “ready-to-fly” at the Guiana Space Center, is AVIO Spa (Colleferro, Italy).