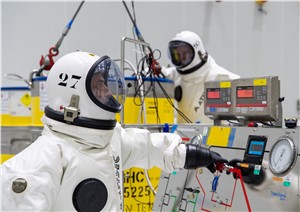 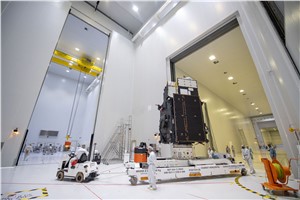 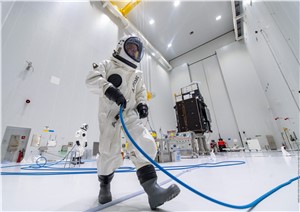 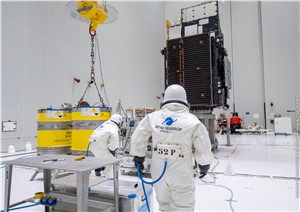 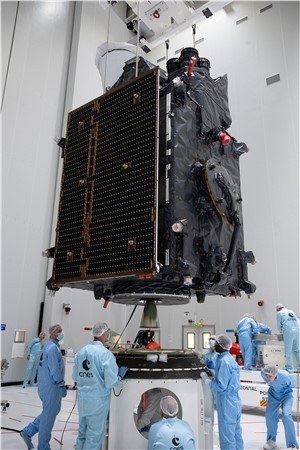 With liftoff now scheduled for 13 December, Europe’s first Meteosat Third Generation Imager (MTG-I1) satellite has been fuelled – a critical and extremely hazardous milestone on the road to launch. Once in geostationary orbit 36,000 km above the equator, this all-new weather satellite will provide state-of-the art observations of Earth’s atmosphere and realtime monitoring of lightning events, taking weather forecasting to the next level.

MTG-I1 has been at Europe’s Spaceport in French Guiana since mid-October being readied for liftoff. Over these last weeks, the satellite’s functionality has been checked out for the last time on terra firma, and all the ‘deployables’, namely the solar array, the Ka-band antenna and the Data Collection Service and Geostationary Search and Rescue instrument antennas finally locked ‘and loaded’ for launch.

Having confirmed the satellite is ‘good to go’, the next step was to load the two tonnes of highly volatile fuel into the central tanks of the satellite that will power it to its final geostationary orbit and allow for 15 years of operational orbit maintenance.

This is an extremely delicate and potentially dangerous phase, with the highly toxic hydrazine and oxidiser being transferred from transport drums into the satellite.

To do this, MTG-I1 was moved to the S5B Hazardous Processing Facility, which has all the necessary detection and decontamination systems needed during this delicate process.

As can be seen from the photographs, the fuelling team is suitably attired in their ‘scape suits’ so that they are completely protected should any unexpected leak occur.

ESA’s launch campaign manager, James Champion, said, “Everything went smoothly, and all the teams here are very happy that we’ve passed this significant milestone in the launch campaign. Well done to the fuelling team from Thales Alenia Space in France who carried out this delicate operation without a hitch.”

The next step for the fuelled satellite, which now weighs almost 3.8 tonnes, is to mount it onto the launch adapter.

This is the first part of the ‘combined operations’ phase with Arianespace where the satellite is assembled carefully into the upper composite of the Ariane 5 rocket. This step also involves the co-passengers, the Galaxy 35 and 36 telecommunication satellites, which occupy the upper position in the launcher fairing.

On 13 December, MTG-I1 will finally take to the skies on an Ariane 5 rocket. This date has actually been advanced by one day owing to a delay in the preceding Vega-C launch, which will now take place after MTG-I1.

MTG-I1 is the first of six satellites that form the full MTG system, which will provide critical data for weather forecasting over the next 20 years. In full operations, the mission will comprise two MTG-I satellites and one MTG Sounding (MTG-S) satellites working in tandem.

The Lightning Imager offers a completely new capability for European meteorological satellites. It will continuously monitor more than 80% of the Earth disc for lightning discharges, taking place either between clouds or between clouds and the ground.

These all-new instruments will allow severe storms to be detected in their early stages and will therefore be key for issuing timely warnings.

The MTG mission is a cooperation between Eumetsat and ESA. ESA is responsible developing and procuring the six MTG satellites. Eumetsat defines the system requirements, develops the ground systems, procures the launch services, operates the satellites, and makes the data available to users.