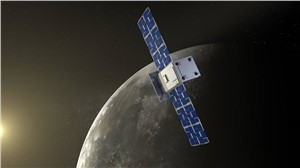 NASA's CAPSTONE spacecraft has completed final maneuvers to place it in its target orbit around the Moon, refining its path in the orbit it arrived to last week.

The spacecraft now is in the operational phase of its pathfinding mission, during which it will test an orbit key to future Artemis missions and demonstrate new technologies for spacecraft operating near the Moon.

“NASA’s partnership with Advanced Space on CAPSTONE is enabling NASA to gain critical, additional capabilities at a lower cost,” said NASA Administrator Bill Nelson. “CAPSTONE is part of our new era of human exploration at the Moon, testing the unique orbit planned for the Gateway lunar space station.”

CAPSTONE – short for Cislunar Autonomous Positioning System Technology Operations and Navigation Experiment – is a technology demonstration, designed to prove the reliability of new capabilities so that they can be used in future missions. CAPSTONE is the first spacecraft to fly in a near-rectilinear halo orbit (NRHO) and the first CubeSat to operate at the Moon. This orbit is the same planned for Gateway, an upcoming Moon-orbiting space station that will support NASA's Artemis missions. CAPSTONE will gather data on this orbit for at least six months to support Gateway's operational planning.

"Missions like CAPSTONE allow us to reduce risk for future spacecraft, giving us a chance to test our understanding and demonstrate technologies we intend to use in the future," said Jim Reuter, associate administrator for NASA's Space Technology Mission Directorate. "Partnering with innovative U.S. companies, including several small businesses, on CAPSTONE has given us the chance to forge new ground, merging commercial interests with NASA's goals."

CAPSTONE took a four-month journey from launch to orbit – overcoming challenges related to communications and propulsion along the way – and performed an initial orbit insertion maneuver on Nov. 13. In the following days, the CAPSTONE mission operations team, led by Advanced Space of Westminster, Colorado, analyzed data from the spacecraft to confirm it was in the expected orbit and carried out two clean-up maneuvers to refine its track.

In addition to studying this unique orbit, CAPSTONE's mission also includes two technology demonstrations that could be used by future spacecraft. The Cislunar Autonomous Positioning System, or CAPS, is a navigational software developed by Advanced Space that would allow spacecraft operating near the Moon to determine their position in space without relying exclusively on tracking from Earth. CAPSTONE will demonstrate this technology by communicating directly with NASA's Lunar Reconnaissance Orbiter, which has been in orbit around the Moon since 2009. CAPSTONE will also demonstrate one-way ranging using a chip-scale atomic clock, which could allow spacecraft to determine their position in space without the need for a dedicated downlink to ground stations.

"We have been working to this point since we started the company over 11 years ago. Getting into this orbit at the Moon validates so much hard work and grit by the combined CAPSTONE mission operations team," said Bradley Cheetham, principal investigator for CAPSTONE and chief executive officer of Advanced Space. "The capabilities we have demonstrated and the technologies still to be matured will support future missions for decades to come."

CAPSTONE launched June 28, 2022, aboard a Rocket Lab Electron rocket from Mahia, New Zealand. After launch, a Photon upper stage raised CAPSTONE's orbit and injected the spacecraft into its ballistic lunar transfer, a long but fuel-efficient trajectory that carried the spacecraft to the Moon over the course of more than four months.

CAPSTONE is commercially owned and operated by Advanced Space. It represents an innovative collaboration between NASA and industry to provide rapid results and feedback to inform future exploration and science missions. The spacecraft was designed and built by Terran Orbital. Operations are performed jointly by teams at Advanced Space and Terran Orbital. The mission is also supported by Stellar Exploration, Space Dynamics Laboratory, Orion Space Solutions, Tethers Unlimited, Inc., and Morehead State University.