Artemis Powering Past the Moon

Artemis Powering Past the Moon 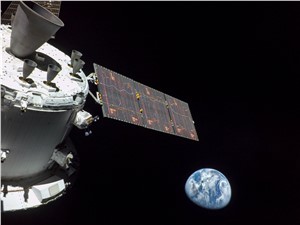 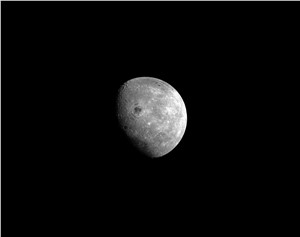 The European Service Module is powering Orion around the Moon and back, providing propulsion, temperature control, electricity as well as storage and delivery for essential supplies such as fuel, water and air. This first Artemis mission is an uncrewed test mission, putting the spacecraft through its paces preparing to send astronauts forward to the Moon.

After liftoff at 07:47 CET (06:47 GMT, 01:47 local time) on 16 November, the European Service Module unfolded its 7-m solar wings to start generating electricity. The Orion spacecraft received a final boost from NASA’s Artemis rocket’s second stage and has been on a five-day cruise to the Moon since.

Today was a key moment for the NASA and ESA teams operating Orion, at just a little more than 130 km from the lunar surface the main engine on the European Service Module – a repurposed Space Shuttle engine that is now on 20th spaceflight – fired for just under 150 seconds to push the spacecraft and head towards a lunar orbit using the Moon’s gravity to reduce fuel consumption.

“It has been an absolute joy to follow the mission so far,” says ESA’s Programme Manger for the European Service Modules, Philippe Deloo, “all the thousands of components inside have been working together flawlessly as designed, a testament to the international collaboration and prowess of European and US industry.”

Mission control for Orion is at the Johnson Space Center in Houston, USA, with European engineers on hand at all times to offer in-depth expertise on the finer details of the service module. The mission evaluation room based at ESA’s technical heart in The Netherlands has personnel round the clock in direct communication with mission control.

The goal of the Artemis I mission is to stress-test the mission profile, the spacecraft, and the people operating it in preparation for flights with astronauts.

“Operationally the spacecraft is performing perfectly and the international collaboration with this new spacecraft with new flight rules is great to see,” continues Philippe, “The teams across both sides of the Atlantic are showing exemplary skills, knowledge and teamwork leading humankind forward to the Moon.”

Inside Orion
Inside the Orion crew capsule are multiple experiments to prepare for astronaut flights responsibly. These include an ESA investigation recording the radiation doses an astronaut will receive and a German Aerospace Center, DLR, mannequin that is being used to test a radiation vest that astronauts could wear for protection during solar storms.

Orion is now following the Moon’s orbit around Earth and will officially enter lunar orbit on its tenth day of flight, 25 November, when the European Service Module performs the Distant Retrograde Insertion, firing its thrusters to brake Orion and keep flying around the Moon.

The mission is set to end with a splashdown in the Pacific Ocean on 11 December. Visit ESA’s Orion blog for frequent and more detailed updates.

Tell a friend:
Artemis Powering Past the Moon