The Road to the Moon

The Road to the Moon 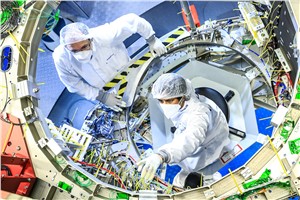 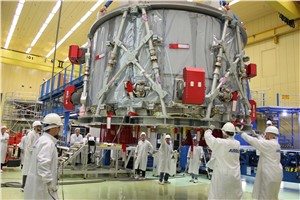 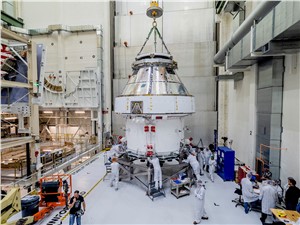 The birth of a spacecraft takes many years from design through to assembly, testing and launch. Here we speak to Airbus engineer Paolo Artusio about how the ESM-1, the European Service Module which will propel the Orion spacecraft to the Moon, took shape.

For Artusio, the moment a programme transitions to its assembly, integration and test (AIT) phase is: “When engineers’ dreams leave their hands and begin to become reality.”

Artusio is the ESM’s AIT leader, and he will oversee this important evolution with four of the European Service Modules (ESMs) that Airbus is supplying for the NASA Orion spacecraft which will return humans to the Moon.

The Airbus-built ESMs are to provide propulsion, power, water, oxygen and nitrogen for crews aboard the NASA Orion spacecraft in flights to the Moon, and potentially beyond. It marks the first time this space agency has entrusted a non-U.S. company to build a mission-critical element for an American human spaceflight mission. Airbus developed and produces the ESMs under contract to the European Space Agency.

Details count in the ESM’s assembly, integration and test
The ESM is a highly-complex spacecraft, with the Airbus teams responsible for the assembly, integration and test of more than 20,000 parts and components that are used in each service module. This includes the full range of space hardware, from electrical equipment to engines, solar panels, fuel tanks and life support supplies, as well as approximately 12 kilometres of cables.

Built as a cylindrical structure, the ESM has five major elements: the upper and lower platforms, the longeron, the square panel and shear panel. Its AIT process involves the Airbus teams bringing these components together and fitting all the vital elements needed for crew life support (providing power and such other commodities as water, oxygen and nitrogen), along with propulsion for in-space manoeuvering.

“The ESM is really compressed – both in terms of how tight everything is fitted into the cylinder and how the AIT programme is tightly scheduled from the timing point of view,” Artusio says.

A sustained programme pace for Orion ESMs
The first module, ESM-1 (christened “Bremen,” in honour of the Airbus facility where it was designed and built), was delivered to NASA in November 2018. Airbus provided the second ESM to NASA in October 2021.

ESM-3 is advancing through the integration phase in Airbus’ Bremen clean room facility, including such initial subassemblies as the thermal control system and the propulsion system harnesses.

The fourth ESM’s primary structure was delivered in recent months by Airbus’ subcontractor, Thales Alenia Space, and is being readied for its own cycle of assembly, integration and test activity.

“The Roman philosopher Seneca is quoted as saying: ‘Luck is what happens when preparation meets opportunity,’" Artusio explained. “I’ve had many great career opportunities that I attribute to my dedication at work, bringing me to this dream job with a prime contractor for a programme that literally opens a new era of space exploration.”

“I’ve had many great career opportunities…bringing me to this prime contractor for a programme that literally opens a new era of space exploration.” Paolo Artusio, Airbus space division’s AIT leader

Artusio’s expertise has perfectly positioned him for the AIT challenges that come with the European Service Module’s complexity – and the fact that human lives depend on its operation. He was previously involved in such projects as the Airbus-built Automated Transfer Vehicle (ATV) cargo resupply spacecraft that serviced the International Space Station and on which much of the ESM design is based, along with the Columbus laboratory which is permanently attached to the Earth-orbiting facility.

Artusio is proud to have this key role in a project that underscores Europe’s prime contractor contribution to the U.S.-led Artemis programme, which comes 50 years after the first crewed Moon landing in 1969.
Orion “takes off” the integration stand

After this long journey we are excited to now see the Artemis I launch just two days away -  stay tuned!

Tell a friend:
The Road to the Moon