Flying High on the New A321XLR

This news is classified in: Aerospace Aviation Engines / Power / Fuel

Flying High on the New A321XLR 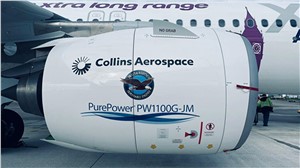 After providing nearly 20,000 nacelles to Airbus over the years, Collins Aerospace is part of the original equipment manufacturer’s team preparing for the launch of its newest aircraft in 2024 – the A321XLR. Collins has eight decades of aerostructures experience and has certified 20 modern nacelle programs over the past decade alone.

“With our long history designing and manufacturing the full aerodynamic nacelle structure that surrounds the jet engines on Airbus platforms ranging from the A220 to the A350, Collins has delivered the majority of our nacelles to the A320 family of aircraft,” said Corey Gloede, chief engineer for Airbus Aerostructures Programs at Collins Aerospace. “Supporting continued operational improvements leading to greater sustainability on those next-gen aircraft is where much of the action is these days.”

What’s important about these flight tests is how the propulsion systems on these platforms not only deliver industry-leading sustainability benefits and dependable, world-class operating costs, but how GTF-powered aircraft reduce fuel consumption and carbon dioxide emissions by up to 16-20 percent, nitrogen oxide emissions by up to 50 percent and noise footprint by up to 75 percent. That’s key for an aerospace industry that’s looking to be carbon neutral by 2050.

Looking to the future, the new GTFA engine will further lower fuel consumption and carbon dioxide emissions by up to 1 percent compared to the current model GTF engine. And since the new engine is capable of a takeoff thrust improvement of up to 4 percent at sea level, the engine should enable the longer range and higher payload that will be required for the new A321XLR aircraft.

Demonstrating operational excellence
And as the GTF engine eventually evolves into the GTFA and enters service, Collins nacelles won’t require any configuration changes because they’re designed with product commonality to ensure intermixability.

“As the engine changes, our existing nacelle design can absorb those modifications with minimal impact – which is of great benefit to our customers,” Gloede said. “Our forward-thinking engineering teams designed our products to ensure commonality across platforms, helping ensure new engines can more quickly take flight.”

Tell a friend:
Flying High on the New A321XLR