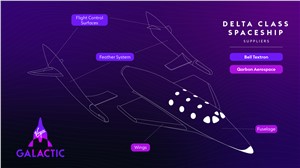 Virgin Galactic Holdings, Inc. (NYSE: SPCE) (the “Company” or “Virgin Galactic”), an aerospace and space travel company, today announced that it has reached agreement with Bell Textron Inc. ("Bell") and Qarbon Aerospace to manufacture key subassemblies for the Company’s new Delta class spaceships. The production-model vehicle is designed to fly weekly with six passengers per ship. Production is slated to begin in 2023.

Bell, a subsidiary of Textron Inc. with more than 85 years of manufacturing experience in the aviation industry, will supply the unique feathering system and flight control surfaces. Qarbon Aerospace, known for its expertise in constructing large, complex composite parts for aerospace and aviation, will produce the fuselage and wing. The companies were selected following a competitive RFP process based on their ability to meet Virgin Galactic’s unique design and fabrication requirements.

Virgin Galactic will continue to be responsible for the overall system architecture, design authority for all components, and the final assembly, integration, checkout, and acceptance testing of the vehicles.

“The Delta class spaceships are an evolution of our distinctive flight system, designed for improved manufacturability, maintenance and flight rate capability,” said Virgin Galactic CEO Michael Colglazier. “Bell and Qarbon Aerospace are established partners who bring know-how, ideas and resources that will enable us to produce up to six new Delta Class ships per year. Together with Aurora Flight Sciences, who is producing our next gen motherships, we now have the primary suppliers in place to propel the production of our spaceline fleet at scale.”

Qarbon Aerospace CEO, Pete Wick said, “We are truly honored that Virgin Galactic has selected Qarbon Aerospace to play such a critical role in this cutting-edge technology platform taking passenger spaceflight to the next level. This is the beginning of what I know is going to be a long and extremely successful partnership.”

As previously announced, the spaceships will be assembled at Virgin Galactic’s new facility in Arizona. The first Delta class spaceships are expected to commence revenue-generating payload flights in late 2025, progressing to private astronaut flights in 2026.

“After a highly competitive and methodical selection process, we are thrilled to be partnering with Bell and Qarbon Aerospace,” added Swami Iyer, Virgin Galactic President, Aerospace Systems. "The Delta spaceship manufacturing process will benefit from our investment in digital twin technology, which enables seamless integration, real-time collaboration, strong governance, and increased production efficiency and reliability.”