This news is classified in: Aerospace Missiles / Rockets Space 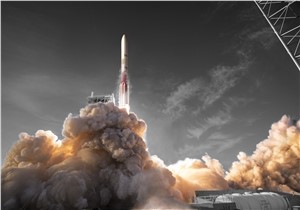 United Launch Alliance (ULA) is nearing completion of the development of the next-generation Vulcan Centaur launch vehicle and sets path for its first launch early next year.

“We could not be more excited to be this close to seeing Vulcan lift off on its inaugural flight,” said Tory Bruno, ULA’s president and CEO. “Vulcan’s high energy design coupled with innovative technology provides one scalable system for all missions and will transform the future of space launch.”

ULA is proceeding to a first flight of Vulcan 1st quarter 2023 to align with a request from its payload customer Astrobotic, who will be flying its Peregrine lunar lander to the Moon for NASA’s Commercial Lunar Payload Services (CLPS) program.

In addition to the Astrobotic and Celestis payloads, Vulcan will carry two demonstration satellites for Amazon as part of its Project Kuiper.

The first Vulcan launch vehicle is nearing completion in ULA’s factory in Decatur, Alabama and is awaiting installation of its BE-4 engines. We expect to ship the completed vehicle to the launch site in November.

Once at the Cape, Vulcan will undergo a final series of tests to verify its readiness for flight consisting of multiple tanking tests and a wet dress rehearsal, culminating in flight readiness firing in December, which will be the final step prior to launch. Following the successful final testing, Astrobotic and the other payloads will be installed on the launch vehicle.

“This has been an incredible journey to get to this point and I am so proud of the development team,” said Bruno. “We look forward to the first flight as Vulcan offers all customers higher performance and greater affordability while continuing to deliver our unmatched reliability.”

Leveraging a legacy of 100 percent mission success launching more than 150 missions to explore, protect and enhance our world, ULA is the nation’s most experienced and reliable launch service provider with world-leading reliability, schedule confidence, and mission optimization. We deliver value unmatched by any launch services company in the industry, a tireless drive to improve, and commitment to the extraordinary.