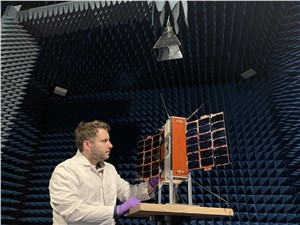 The Prometheus 2 satellites, which have been jointly designed by Airbus and In-Space Missions, are on track for their UK launch from Newquay, Cornwall, later this year with environmental testing complete and vibration testing ongoing.

The Prometheus 2 cubesats are owned by the Defence Science and Technology Laboratory (Dstl) on behalf of the Ministry of Defence (MOD). They have been co-funded by Airbus Defence and Space with In-Space Missions Ltd leading the construction.

The two cereal box sized Prometheus-2 cubesats will operate in low Earth orbit, at around 550km and will provide a test platform for sophisticated imaging, and monitoring radio signals including GPS. The satellites will support MOD science and technology (S&T) activities both in orbit and on the ground through the development of ground systems focussed at Dstl’s site near Portsmouth. The cubesats will each have separate equipment installed to test future concepts in support of the MOD’s ISTARI programme for future space-based intelligence and surveillance. The Airbus payloads will support company internal R&D projects targeted at future LEO operations, ISR mission concepts as well as external third party customer R&D needs.

Richard Franklin, Managing Director of Airbus Defence and Space UK said: “Achieving this crucial milestone further demonstrates the value of government and Airbus collaborative investments working alongside SMEs to achieve fast results in orbit and also to help support and develop the UK space industry ecosystem. Engineering the first UK launched small satellites, designed and built in the UK, is a great achievement for all those involved in this successful collaboration and builds on the success of the Prometheus 1 payload launched last year.”

Incorporating modern Software Defined Radio technology, these payloads will also enable third-party organisations to use the Prometheus 2 constellation to research signal gathering, inter-satellite communication, in-orbit data processing, space domain awareness and position, navigation and timing or geolocation capabilities. Access to this research capability will be available through Airbus Defence and Space Ltd. The satellites are research demonstrators and will not be used in defence intelligence, surveillance, and reconnaissance (ISR) operations.

The lessons learnt from this mission will be used to de-risk key technologies, generate the next wave of collaborative experiments, enhance international partnerships and support Dstl’s own satellite operations.

Prometheus 2 is set to launch on Virgin Orbit’s Cosmic Girl, an adapted Boeing 747, later this year and is scheduled to operate for three years.