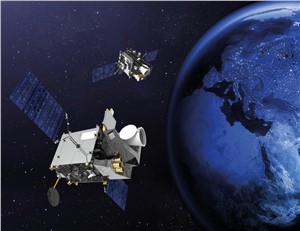 Thales Alenia Space, a joint venture between Thales (67%) and Leonardo (33%), as prime contractor for the Meteosat Third Generation (MTG) satellites, is currently carrying out the final integration phase on the MTG-I1 satellite. The MTG-I1 will soon depart for the Guiana Space Centre in Kourou, French Guiana, where its launch is scheduled for the end of 2022 onboard an Ariane 5 rocket.

MTG-I1 is the first imaging satellite in the Meteosat Third Generation program, which aims to improve weather forecasting in Europe and Africa. Designed as a follow-on to the Meteosat Second Generation (MSG) series, the MTG program is a collaborative venture between the European Space Agency (ESA) and EUMETSAT   to ensure the continuity of high-resolution weather monitoring beyond 2040. Built by Thales Alenia Space in cooperation with OHB, the MTG satellites will operate in geostationary orbit 36,000 km above the Earth and will have a life span of 8.5 years.

The MTG-I1 satellite is equipped with a flexible combined imager (FCI), a technological gem that can provide a full image of the Earth every 10 minutes (versus 15 minutes for the previous generation) and includes a fast mode capable of providing images of Europe every 2.5 minutes. With a spatial resolution of 0.5 to 1 km, the satellite will improve the reliability of weather forecasts over a timescale of minutes to hours.

The MTG-I1 is also equipped with an extremely sophisticated lightning imager (LI), the first of its kind in Europe. Developed by Leonardo,  the LI, made of four cameras, will be able to detect cloud-to-cloud and cloud-to-ground flashes in all potential scenarios (for example during both night and day). This unique instrument will further our knowledge of how lightning is generated and improve emergency population warnings as well as weather nowcasting, traffic control safety and climate change awareness.

This first satellite in the MTG series will become operational in orbit during 2023 and will be joined by three other imaging satellites and two sounding satellites between 2024 and 2030. Together, they will form a geostationary constellation operated by EUMETSAT that will represent a big step forward in terms of the monitoring of extreme weather.

The MTG-I1 imaging satellite will leave the Thales Alenia Space site in Cannes in late September 2022. Special means will be deployed to transport the four-tonne satellite and its container to the Fos-sur-Mer port for shipment. The satellite is scheduled to be launched from the Guiana Space Centre in Kourou before the end of 2022, onboard an Ariane 5 rocket.

Increasingly accurate weather forecasts
European meteorology has become increasingly accurate over the decades. With the first-generation Meteosat satellites, images were updated every 30 minutes, a figure reduced to 15 minutes on the second generation. MTG will further reduce this refresh rate to just 10 minutes in full disk mode and 2.5 minutes in fast mode for Europe, making weather forecasts even more reliable.

Thales Alenia Space has been prime contractor for the Meteosat satellites on behalf of ESA for more than 30 years. The company delivered into orbit seven first-generation Meteosat satellites (the first model was launched in November 1977) and four second-generation Meteosat satellites (MSG), two of which are still in service today. It is currently building the six Meteosat Third Generation satellites, in partnership with OHB. Thales Alenia Space is also contributing to the development of the ground segment for EUMETSAT, by designing and building the component for first-level image data processing (IDPF). Telespazio, a joint venture between Leonardo (67%) and Thales (33%), is also involved in the ground segment - both for data acquisition and for satellite command and control - and will supply EUMETSAT with launch and early orbit phase (LEOP) services for two satellites, with an option for a third.

Meteosat satellites have been the main source of meteorological data for Europe and Africa since 1977. The data from these satellites is one of ESA and EUMETSAT’s key contributions to the World Meteorological Organization’s Global Observing System.

Tell a friend:
First Imaging Satellite in Meteosat Third Generation Fleet in Final Integration Phase Prior to Departure for Kourou