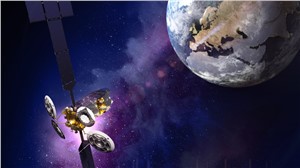 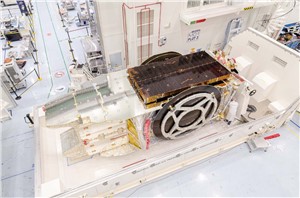 EUTELSAT KONNECT VHTS communications satellite built by Thales Alenia Space, the joint venture between Thales (67%) and Leonardo (33%), has been successfully launched by an Ariane 5 rocket from the Guiana Space Center, Europe’s Spaceport in Kourou, French Guiana.

EUTELSAT KONNECT VHTS satellite, a very high throughput satellite built for the international operator Eutelsat, will deliver high-speed broadband and mobile connectivity across Europe, North Africa and the Middle East. With a Ka-band capacity of 500 Gbps, it is the largest and most capacitive geostationary communications satellite ever built in Europe. The satellite embarks the most powerful on-board digital processor ever put in orbit, offering capacity allocation flexibility and an optimum spectrum use.

EUTELSAT KONNECT VHTS is the satellite of all the superlatives: it is about 9 meters high, as tall as a three-story building, with a wingspan of more than 45 meters and a launch mass of 6,4 metric tons. With a design life exceeding 15 years, the satellite is built on a full electric Spacebus NEO platform from Thales Alenia Space and developed with the support of French and European space agency’s CNES and ESA.

This new-generation satellite, harbouring a capacity seven times that of its brother satellite EUTELSAT KONNECT launched in 2020, will help bridge the digital divide by providing very high-speed Internet access across Europe, especially in isolated regions with poor coverage. The HTS services, available on the ground, in the air and at sea, anywhere and anytime in the covered area, will be comparable to a fiber-optic network’s performance and services.