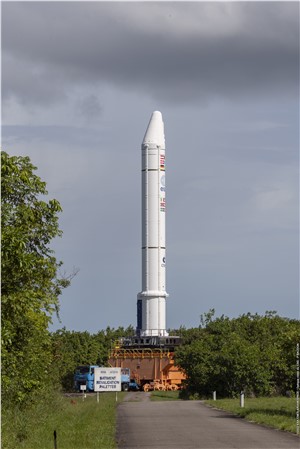 The fourth Spacebus Neo satellite to benefit from ESA’s Neosat programme has launched into space on board the second Ariane 5 launch mission of 2022.

The 8.9 metre, three-storeys-high communications satellite – which will deliver high-speed broadband and in-flight connectivity across Europe for its operator, Eutelsat – weighs 6.525 tonnes and accounted for 99% of the 6.62-tonne launch mass.

The satellite was launched at 23:45 CEST (18:45 local time) on 7 September from Europe’s spaceport in Kourou, French Guiana, into a sub-synchronous transfer orbit. This highly elliptical trajectory, which loops from close to Earth to up to 60 000 kilometres away from the planet at an inclination of 3.5°, will enable it to transfer into a geostationary orbit some 36 000 kilometres above Earth.

After reaching geostationary orbit the satellite – the tallest ever built in Europe – will be tested further before it enters commercial service.

The satellite features new antenna deployment and pointing mechanisms used within the antenna tracking system, as well as other innovative features including next-generation batteries and structural panels, all developed under the ESA Partnership Project.

Elodie Viau, Director of Telecommunications and Integrated Applications at ESA, said: “I am proud to support the European space industry to foster innovation and succeed in the highly competitive global telecommunications market. Investing in space creates jobs and prosperity on Earth.”

ESA’s Neosat programme comprises both Spacebus Neo by Thales Alenia Space and Eurostar Neo by Airbus. It includes development up to in-orbit validation of new satellite product lines for both companies, allowing the European space industry to deliver competitive satellites for the global commercial satellite market.

Sixteen Neosat satellites have been ordered so far, demonstrating the high economic impact of ESA’s Partnership Projects, which foster the development of sustainable end-to-end systems up to in-orbit validation.

Neosat is part of ESA’s programme of Advanced Research in Telecommunications Systems (ARTES) and is supported by the French space agency, CNES, and the UK Space Agency.

The launch of the Eutelsat Konnect Very High Throughput Satellite is the 114th Ariane 5 mission since its inaugural flight in 1996.

They will include the launch of the first of a new-generation series of satellites to advance weather forecasting from geostationary orbit developed by ESA and Eumetsat, called Meteosat third-generation imager 1.

And Ariane 5 will launch JUICE – ESA’s scientific mission to explore the Jupiter system and its icy, ocean-bearing moons, with an initial launch window in April 2023.