SWOT satellite all set to depart for United States

SWOT satellite all set to depart for United States 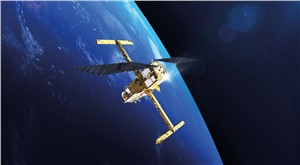 After more than a year in assembly, integration and testing at Thales Alenia Space’s facility in Cannes, France, for the French and U.S. space agencies CNES and NASA, the SWOT satellite (Surface Water and Ocean Topography) is making final preparations to depart for its forthcoming launch from the United States.

SWOT is a joint mission of CNES and NASA, with contributions from the Canadian Space Agency (CSA) and the United Kingdom Space Agency (UKSA). It is dedicated to measuring surface water levels in lakes and rivers and river discharges, and to acquiring highly precise and detailed data on ocean dynamics. SWOT features a number of unprecedented technological innovations and is based on a major disruptive technology, namely the wide-swath KaRIn interferometer designed by NASA’s Jet Propulsion Laboratory (JPL). CNES and Thales Alenia Space built the radio-frequency assembly for this instrument. KaRIn has two Ka-band synthetic aperture radar (SAR) antennas separated by a 10-metre boom that will enable it to view a 120-kilometre swath with a horizontal resolution on the order of 50 to 100 metres, configurable on either side of the satellite’s ground track.

SWOT will also be carrying a Nadir module comprising the same instruments as the Jason series of satellites, including the Poseidon dual-frequency altimeter built by Thales Alenia Space. This module will also carry the DORIS precise orbit determination system, built by Thales, an Advanced Microwave Radiometer (AMR), a GPS Payload (GPSP) and a Laser Retro-reflector Array (LRA) developed by JPL.

SWOT promises to revolutionize oceanography and land surface hydrology as the latest in a long line of missions accomplished in partnership by CNES, NASA and Thales Alenia Space, beginning in 1992 with the launch of the TOPEX/Poseidon satellite and continued through the series of Jason satellite missions. SWOT will be the first satellite to be decommissioned at the end of its lifetime by making a controlled atmospheric re-entry, in compliance with the French Space Operations Act (FSOA) geared towards tackling space debris, which took effect in 2020.

Designed to study ocean topography and surface waters, SWOT has a two-pronged mission covering oceanography and hydrology. The satellite will observe ocean circulation in 2D with a tenfold gain in resolution. This will help us analyse and better understand the effects of coastal circulation on marine life, ecosystems, water quality and energy transfers to improve modelling of atmosphere-ocean interactions. The hydrology part of the mission will assess variations in water levels in wetlands, lakes and reservoirs, as well as river discharges. SWOT is thus set to deliver key innovations in a sector where the strategic, economic and societal stakes have never been higher.

SWOT is now primed for its planned departure to the United States in early October, bringing to a close a year of unstinting efforts on the part of French and U.S. teams at Thales Alenia Space, the world leader in satellite altimetry. Over the last 12 months, the science payload supplied by JPL has been integrated with the spacecraft bus developed by Thales Alenia Space for prime contractor CNES. After these assembly operations, the teams conducted a series of functional and environmental tests on the satellite and its instruments to verify their ability to withstand the harsh conditions of launch and space.

A U.S. Air Force C5-Galaxy freighter aircraft will be deployed specially to fly the two-tonne satellite and its shipping container from Nice Airport to Vandenberg Space Force Base (VSFB) for a launch no earlier than 5 December atop a Falcon 9 vehicle operated by SpaceX.

At the press briefing at Thales Alenia Space on 6 September, Thierry Lafon, CNES’s SWOT project leader, said: “The completion of SWOT’s integration in France illustrates our nation’s desire through CNES and the PIA future investment programme, and that of its international and industry partners, to pave the way for new generations of observation systems built around disruptive technologies like interferometric radar altimetry. This pioneering mission will be the first to conduct a systematic global survey of Earth’s water, marking a giant leap towards managing this resource more efficiently. It holds out a lot of potential for our space industry as well as for future users of its data. The international scientific community is eagerly awaiting these new data to gain a closer insight into the global water cycle and enhance their understanding of the ocean’s role in climate change.”

“SWOT is an emblematic mission not only because it seeks to address international climate stakes, but also because it will serve what is one of our most critical shared resources, Water,” added Christophe Duplay, SWOT programme manager at Thales Alenia Space. “The satellite will allow us for the first time to survey the entire water cycle from lakes and rivers to seas and oceans. For the teams at Thales Alenia Space, this programme is the continuation of its longstanding partnership with CNES and NASA in the field of satellite altimetry since the successful Jason missions that have enabled operational oceanography to be deployed worldwide.”

CNES is the government agency responsible for shaping France’s space policy and implementing it in Europe. Its task is to conceive and orbit satellites, invent the space systems of the future and nurture new services to aid us in our daily lives.

Founded in 1961, it is the initiator of major space projects, launch vehicles and satellites, and the partner of choice for industry, supporting exports and fuelling innovation. CNES is working in infinite fields of applications in five core areas of focus: Ariane, science, Earth observation, telecommunications and defence.

France, represented by CNES, is the leading contributor to the European Space Agency (ESA), which conducts Europe’s space policy on behalf of its 22 member states. www.cnes.fr

Tell a friend:
SWOT satellite all set to depart for United States