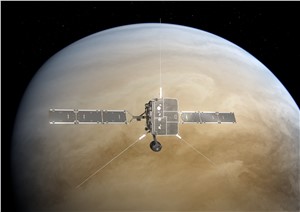 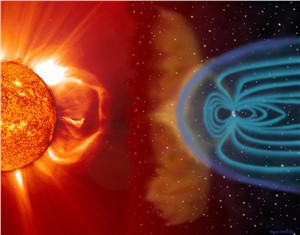 On 30 Aug, a large coronal mass ejection shot from the Sun in the direction of Venus. Not long later, the storm arrived at the second planet from the Sun. As the data continues to come in from Solar Orbiter, this strike reveals why ‘in situ’ monitoring of space weather and its effects on the bodies, and spacecraft, of the Solar System are so important.

Fortunately, there were no negative effects on the spacecraft as the ESA-NASA solar observatory is designed to withstand and in fact measure violent outbursts from our star – although Venus doesn’t always get off so lightly. Coronal mass ejections have a tendency of eroding Venus’ atmosphere, stripping off gasses as they whoosh by.

Fly high with Venus fly by
Solar Orbiter is a quarter of the way through its decade-long mission to observe the Sun up close and get a look at its mysterious poles. Its orbit was chosen to be in close resonance with Venus, meaning it returns to the planet’s vicinity every few orbits to use its gravity to alter or tilt its orbit.

This third flyby of Venus took place on Sunday at 01:26 UTC, when Solar Orbiter passed 12 500 km from the planet’s centre, which is very roughly 6 000 km from its gassy ‘surface’. In other words, it passed a distance half the width of Earth.

Its distance from Venus, angle of approach and velocity were meticulously planned to get the exact desired effect from the planet’s large gravitational pull – getting it closer to the Sun than ever before.

“The close approach went exactly to plan, thanks to a great deal of planning from our colleagues in Flight Dynamics and the diligent care of the Flight Control Team”, explains Jose-Luis Pellon-Bailon, Solar Orbiter Operations Manager.

“By trading ‘orbital energy’ with Venus, Solar Orbiter has used the planet’s gravity to change its orbit without the need for masses of expensive fuel. When it returns to the Sun, the spacecraft’s closest approach will be about 4.5 million km closer than before.”

Understanding particles that pose a radiation risk
Data beamed home since Solar Orbiter encountered the solar storm shows how its local environment changed as the large CME swept by. While some instruments had to be turned off during its close approach to Venus, in order to protect them from stray sunlight reflected off of the planet’s surface, Solar Orbiter’s ‘in situ’ instruments remained on, recording among other things an increase in solar energetic particles.

Particles, mostly protons and electrons, but also some ionised atoms like Helium, are emitted by the Sun all the time. When particularly large flares and ejections of plasma are shot from the Sun, these particles are picked up and carried with them, accelerated to near relativistic speeds. It is these particles that pose a radiation risk to astronauts and spacecraft.

Improving our understanding of CMEs and tracking their progress as they breeze through the Solar System is a big part of Solar Orbiter’s mission. By observing CMEs, the solar wind and the Sun’s magnetic field, the spacecraft’s ten science instruments are providing new insight into how the 11-year cycle of solar activity works. Ultimately, these findings will help us better predict periods of stormy space weather and protect planet Earth from the Sun’s violent outbursts.

Goodbye, halo?
This recent CME illustrates a difficulty in space weather observations. As seen in this footage from SOHO, a ‘full halo’ is visible when a CME is either coming straight at Earth, or in this case heading directly away, from the ‘far side’ of the Sun.

Determining if coronal mass ejections are coming towards Earth or away is tricky when viewed from Earth, because in both cases it appears to be expanding. One of the many benefits of the coming Vigil mission is that by combining the images taken from Earth direction and Vigil’s position at the ‘side’ of the Sun, the fifth Lagrange point, distinguishing between an oncoming or departing storm will be easy and reliable.

Space weather gets deep
The Sun exerts its influence on all the bodies of the Solar System. It’s the reason why no life could survive on the inner planets, the temperatures being too hot and their atmospheres having been stripped away long ago.

As we venture from Earth to the Moon, its vital we understand how space weather can affect human bodies, robots, communication systems and plants and animals.

As well as a range of tools to understand the Sun’s effect on Earth infrastructure, ESA’s Space Weather Service Network currently alerts teams flying missions throughout the Solar System of extreme space weather, with forecasts for Mercury, Venus and Mars freely available via the Network’s Portal, and Jupiter on the way.

“Gathering data on events like this is crucial to understanding how they arise, improving our space weather models, forecasts and early-warning systems,” explains Alexi Glover, ESA Space Weather Service Coordinator.

“Solar Orbiter is providing us with an excellent opportunity to compare our forecasts with real observations and test how well our models and tools perform for these regions”.