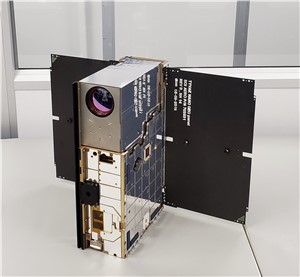 Terran Orbital Corporation (NYSE: LLAP), a global leader in satellite solutions, primarily serving the United States and Allied aerospace and defense industries, has delivered LunIR to Complex 39B at NASA’s Kennedy Space Center. LunIR is a 6U satellite that will fly by the Moon and collect surface thermography as a secondary payload on Artemis 1 – a test mission for NASA’s Space Launch System (SLS). Offering more payload mass, volume capability, and energy, SLS, the world’s most powerful rocket to date, can carry more payload to deep space than any other vehicle. SLS also houses the Orion capsule – NASA’s spacecraft that will take humans deep into space. After the flyby, LunIR will conduct technology demonstrations related to deep-space operations.

The Lunar InfraRed imaging spacecraft, also known as LunIR, is the result of a joint effort between Lockheed Martin and Terran Orbital. Lockheed Martin developed LunIR’s infrared sensor and cryocooler to operate in both day and night, mapping the lunar surface, detecting materials, and collecting thermal signatures. The company also provides the overall systems engineering and mission planning. Terran Orbital designed and built the spacecraft and is responsible for integration and mission assurance.

The mission’s primary objective is a technology demonstration whose findings will potentially address NASA’s strategic knowledge gaps (SKGs) for surface characterization, remote sensing, and site selection observations for the Moon, as well as long-duration missions to Mars. The LunIR sensor could be an important tool for astronauts returning to the Moon, and going beyond to Mars.

“Working alongside Lockheed Martin and NASA is always a privilege,” said Marc Bell, Terran Orbital Co-Founder, Chairman, and Chief Executive Officer. “The technologies Lockheed and NASA bring to the table are second to none. LunIR will help us understand the truly infinite opportunities in lunar and Martian travel. Terran Orbital is thankful for the opportunity to develop and operate the spacecraft for this groundbreaking mission.”

“We look forward to continuing to work with Terran Orbital on this important technology demonstration, and we’re eager to see what images LunIR collects of the Moon once it’s on its way,” said John Ricks, Lockheed Martin program manager for LunIR.