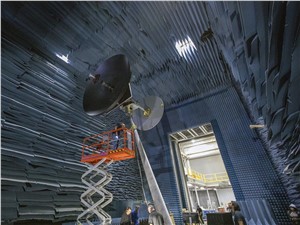 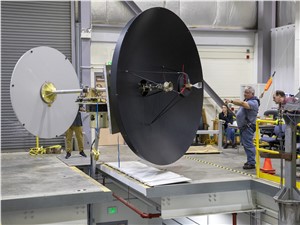 A piece of space hardware set to make the long journey to begin orbiting around a water world in the outer Solar System recently finished its second round of testing this year at NASA’s Langley Research Center in Hampton, Virginia.

The High-Gain antenna (HGA) for NASA’s Europa Clipper, which will conduct nearly 50 flybys of Jupiter’s icy moon Europa, was at Langley’s Experimental Test Range (ETR) in March and April and then again in June and July so researchers could assess its ability to precisely beam data from the spacecraft back to Earth. Between those visits to Langley, the HGA went to NASA’s Goddard Space Flight Center in Greenbelt, Maryland, for vibration and thermal vacuum testing to check its ability to withstand both the shaking of launch and the temperature extremes of space, respectively.

The approximately 10-foot-diameter HGA will beam back information from Europa Clipper’s nine instruments, which will gather data on Europa’s atmosphere, surface and interior. Scientists have strong evidence that Europa is home to a vast and deep subsurface ocean of water that could potentially support life. In fact, there could be more liquid water on Europa than on Earth — yet it is smaller than our Moon.

“We are in the ETR at NASA Langley to measure the performance of the HGA, determining the power and shape of the transmission beam as well as its precise pointing to help know where to point the antenna back to Earth,” said Matt Bray, the designer and lead engineer for the HGA at Johns Hopkins University Applied Physics Laboratory (APL) in Laurel, Maryland.

The HGA operates on NASA deep space X-band radio frequencies of 7.2 and 8.4 (GHz), and Ka-band at 32 (GHz). Thirty-two GHz is many times higher than the frequency of most cell phones. That higher frequency will give Europa Clipper plenty of bandwidth to send data back at high rates. That data will take approximately 45 minutes to reach Earth from orbit around Jupiter.

The ETR is an indoor electromagnetic test facility that allows researchers to characterize transmitters, receivers, antennas and other electromagnetic components and subsystems in a controlled environment. Though there are other facilities around the country that can accommodate similar testing, the ETR’s size, accessibility and availability made it a perfect location for the HGA. A prototype HGA underwent testing at the ETR in 2019.

Europa Clipper is scheduled to launch in October 2024.