LM to Support Severe Weather and Climate Monitoring for NOAA 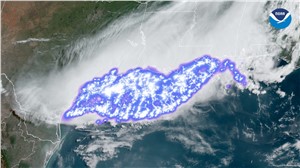 Lockheed Martin [NYSE: LMT] was selected by the National Aeronautics and Space Administration (NASA) to further refine concepts for a critical instrument and the spacecraft bus for the National Oceanic and Atmospheric Administration’s (NOAA) GeoXO weather satellites, the next generation after the Geostationary Operational Environmental Satellites – R (GOES-R) series. These future satellites will ultimately help save lives by enabling even more accurate weather forecasting and measure environmental impacts driven by global climate change.

The Phase A contract awards are for GeoXO’s lightning mapper and spacecraft design. Together, they will help NOAA get an even better look at Earth’s severe weather patterns, marine systems and shifting climate.

“We’re thrilled at this opportunity to take all we’ve learned – through developing remote imaging capabilities for NOAA’s current lightning mapper and the agency’s GOES-R satellite series – and infuse new technology to build a powerful, weather-monitoring platform of the future,” said Adrián Cuadra, Lockheed Martin’s weather programs director. “We’ve continued to advance this technology, which will help provide more timely forecasts and snapshots of our environment to enable decision-making that makes our world a better place for upcoming generations.”

Each selected team will further mature each element’s potential performance, development schedule and cost estimate. For Lockheed Martin, that work will take place at the company’s Space facilities in the San Francisco Bay Area for the lightning mapper, and at the Littleton, Colorado, location for the spacecraft.

Looking at One Million Daily Lightning Flashes
Lightning data is a critical indicator of the behavior of severe thunderstorms, helping to predict the occurrence of severe weather like tornadoes and large hail. Forecasters rely on it to issue early weather warnings that save lives.

One of two teams selected for a $5 million contract to refine the concept for the lightning mapper, Lockheed Martin Space is famed for producing some of the most sophisticated science and weather instruments in the industry. These include the first-of-its-kind Geostationary Lightning Mapper (GLM) and the Solar Ultraviolet Imager instruments on NOAA’s current GOES weather satellites, and the James Webb Space Telescope’s primary infrared imager, NIRCam.

GLM, which flies on NOAA’s GOES-R series satellites, also built by Lockheed Martin, detects about 1 million lightning flashes every day across the western hemisphere. It does this by taking hundreds of images every second at a very specific wavelength of light with filters that cast out nearly all solar glare – and it’s packed with some serious algorithms that synthesize all that data.

For GeoXO’s lightning mapper, the Lockheed Martin team will take the best parts of the game-changing GLM and combine those with newly available technologies to make for an even higher performance instrument. The company will also apply work in predictive analytics that makes interpretation of that lightning data even easier for customers. This builds on similar work done on Lockheed Martin-designed and -installed software that is used to interpret data from NOAA weather satellites, including its current GOES-R series.

A Next-Generation Weather Spacecraft
In addition to Lockheed Martin’s role as an instrument provider, the company will also refine a concept for the spacecraft bus at a contract value of $5 million.

The GeoXO spacecraft design would be based on Lockheed Martin’s modernized LM 2100™ satellite bus, which provides more performance and flexibility for addressing NOAA’s mission needs over the coming decades. The platform features SmartSatTM technology that enables new software pushes and capabilities as weather data needs change over time.

With the GeoXO satellites designed to operate well into the 2050s, it’s even more important they are engineered to be upgraded as the years pass and space technology evolves. To address this need, the Phase A contract includes a study for servicing GeoXO satellites in space. LM 2100 satellites can be equipped with a novel Augmentation System Port Interface (ASPIN). Designed and implemented by Lockheed Martin, the ASPIN docking interface is compliant with the company’s open-source Mission Augmentation Port standard and will allow for more substantial upgrades on orbit, including things like new processors, mass storage or sensors.

More About the Mission – Now and in the Future
For over 50 years, Lockheed Martin has built and launched more than 120 weather and environmental spacecraft for our government’s civil and military agencies. GeoXO is NOAA’s next-generation weather satellite program, supported by NASA. NASA will manage the development of the satellites and launch them for NOAA, which will operate them and deliver data to users worldwide. NOAA and NASA will work with commercial partners to design and build the GeoXO spacecraft and instruments. The first GeoXO launch is planned for the early 2030s and will maintain and advance NOAA’s critical geostationary observations through 2055.

Tell a friend:
LM to Support Severe Weather and Climate Monitoring for NOAA with Instrument and Spacecraft Studies