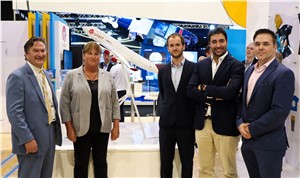 In what will be a mission of firsts, Virgin Orbit (Nasdaq: VORB), a leading launch provider, announced today that it has been selected to launch RHEA Group’s first satellite into space. The international engineering and solutions firm is working with Open Cosmos to design, build and operate its mission. Open Cosmos and RHEA have selected Virgin Orbit from its UK business to carry the satellite, DOVER Pathfinder (DOVER), to Low Earth Orbit aboard its historic flight from Spaceport Cornwall later this year. The mission will mark the first time in history that a satellite launch has been conducted from British soil, helping fulfill the goals of the UK government to enable full end-to-end space capability.

DOVER is funded in part by the UK Space Agency through the European Space Agency’s (ESA) Navigation Programme (NAVISP), which was created to support innovation and competitiveness in the European position, navigation, and timing (PNT) landscape. The DOVER satellite, for which the payload was designed by the RHEA team in the UK, and is built by UK-based Open Cosmos, will serve as a pathfinder for resilient global navigation satellite systems.

“We are delighted to have been selected by RHEA Group and Open Cosmos for their first joint mission. The fact that the DOVER Pathfinder satellite was designed and built in the UK by Open Cosmos, was co-funded by the UK Space Agency and the European Space Agency, and now will be launched by Virgin Orbit from Spaceport Cornwall, is a great example of the power that comes with the infusion of space collaboration taking place across the globe,” said Virgin Orbit CEO Dan Hart. “The work RHEA will do with DOVER will help to assure reliable navigation, which touches all of us and can be vital for everything from environmentally efficient shipping to national security.”

RHEA Group is privately-owned and has specialized in providing bespoke engineering solutions, system development and security services for space, military, government, and other critical infrastructures since its founding in 1992.

John Bone, RHEA Group’s Chief Commercial Officer and UK Vice President, has expressed that the company is pleased to be joining Virgin Orbit in this historic mission.

“We are celebrating our 30th anniversary this year, and we can’t think of a better way to mark this milestone than by partnering with Virgin Orbit to launch our first ever satellite as part of such an historic launch,” said Bone.

Emma Jones, RHEA UK Business Director, noted that DOVER was named after the Dover Strait, the narrowest part of the English Channel which is also known to possess the busiest shipping lanes. Historically, the Dover Straight has been a key location for testing new techniques for PNT.

Open Cosmos is focused on the delivery of satellite missions and the data of the world they can gather from space. Since its creation in 2015, it has developed multiple advanced satellites for telecommunications, earth observation, navigation, and science.

Aleix Megias, Open Cosmos’ Co-Founder and VP of Operations, has expressed that the company is pleased to be joining Virgin Orbit in this historic mission. “It is a pleasure to join Virgin Orbit’s first launch from the UK with this first pathfinder satellite mission of RHEA. The short delivery time of this mission is a demonstration of our capabilities to provide responsive manufacturing, launch and operations of satellite infrastructure, all from the UK. This is why we founded Open Cosmos, to enable companies, organizations and governments to launch their own satellites and benefit from the ability to collect and monitor data from space,” Megias said.

This first-ever orbital launch from British soil will also be Virgin Orbit’s first overseas flight. It will also serve as LauncherOne’s fifth consecutive mission carrying commercial and government customers since beginning operations in 2021, an achievement which demonstrates its ability to launch from any 747-capable airfield globally. Virgin Orbit has been working closely with the UK’s Civil Aviation Authority (CAA), the Royal Air Force (RAF), and the Spaceport Cornwall team to make all necessary preparations for mission liftoff.

Tell a friend:
Satellite Built by Open Cosmos and Rhea Group to Fly on LauncherOne As Part of 1st UK Mission