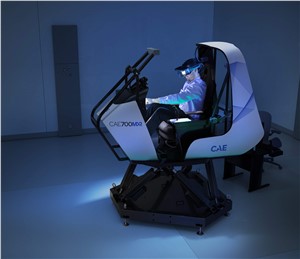 CAE announced today at the Farnborough International Air Show 2022, the launch of its newest advancement in pilot training, the CAE 700MXR Flight Simulator. Initially targeted to the eVTOL market, the CAE 700MXR will revolutionize flight training for complex urban settings with a compact mini-motion platform and 360° field of view visuals that deliver high-fidelity, physics-based simulation tailored to single-pilot operations.

“The CAE 700MXR’s ultra-realistic simulation bridges the gap between the physical and virtual worlds to deliver an unrivalled training experience for future eVTOL pilots,” said Nick Leontidis, CAE’s Civil Group President. “CAE is leading the way, developing advanced technologies and setting the training standard for the eVTOL market, and our innovative approach will ensure faster, more efficient training for pilots."

As previously announced, Volocopter and CAE are working together on developing, certifying and deploying a pilot training program for operating Volocopter’s electric air taxi leveraging mixed reality, in support of the launch of Volocopter’s anticipated urban air mobility (UAM) services for the 2024 Olympic and Paralympic Games in Paris, France.

“Pilots will play a pivotal role in launching electric air taxi services,” says Christian Bauer, Volocopter’s Chief Commercial Officer. “We must ensure that the simulators for this new aircraft conform with the highest-quality pilot training in aviation.”

“We look forward to working with the Volocopter team to ensure their pilots receive industry-leading training in the classroom and on the CAE700MXR simulator,” added Mr. Leontidis. “Volocopter is a valued partner, and CAE will be there every step of the way to support their entry into service.”

During the Farnborough International Air Show 2022, CAE will deliver an augmented reality demonstration of the CAE 700MXR that will allow attendees to visualize the 3D perspective of the new flight simulator and explore the innovative features and functionalities of this novel training device.