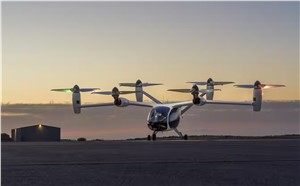 Joby Aviation, Inc. (NYSE:JOBY), a California-based company developing all-electric aircraft for commercial passenger service, today announced it has formally applied for its revolutionary aircraft design to be certified for use in the United Kingdom.

While Joby is currently pursuing the “type certification” for its aircraft with the U.S. Federal Aviation Administration (“FAA”) and expects the U.S. to be its first operating market, this application will allow Joby’s U.S.-based certification to be concurrently validated by the United Kingdom’s Civil Aviation Authority (“CAA”), accelerating the Company’s path to market in the U.K. Joby is believed to be the first eVTOL company to apply for foreign validation of its FAA type certificate.

With a maximum range of 150 miles and a quiet acoustic profile, Joby’s five-seat, piloted electric vertical take-off and landing (“eVTOL”) aircraft is designed to connect people and cities through fast, quiet, and emissions-free flight.

Joby’s application builds on a joint statement by the FAA and CAA in March, announcing their intent to leverage the existing Bilateral Aviation Safety Agreement between the two regulators to streamline the introduction of eVTOL aircraft using existing regulatory frameworks.

Commenting on the application, JoeBen Bevirt, founder and CEO, Joby Aviation, said: “By working hand-in-hand on certification, the U.K. and the U.S. are setting the stage for these two countries to be amongst the earliest adopters of this important new technology."

“We strongly believe that a collaborative approach to regulation helps to foster greater safety and accelerate the introduction of new technologies that benefit the public and the environment.”

“We’re incredibly excited about the potential for electric aerial ridesharing to offer a new form of clean and affordable urban and regional connectivity across the U.K., where more than 80% of the population lives in, or near, cities.”

Type certification is a multi-year process which sees a company undertake rigorous testing and documentation across each aircraft system in order to prove the aircraft is safe and ready for commercial operations. Similar type certification processes are undertaken for all aircraft, big and small – an approach that has helped shape air travel into one of the safest forms of transportation available today.

In March, Joby announced it had joined ADS Group, the premiere U.K. trade association for aerospace, defense and security companies, and is working with the U.K.’s leading provider of air traffic control services, NATS, to explore integration of Joby services into the U.K. airspace.

The news comes ahead of the Farnborough International Airshow, one of the world’s largest airshows, which will take place in the U.K. from July 18-22.