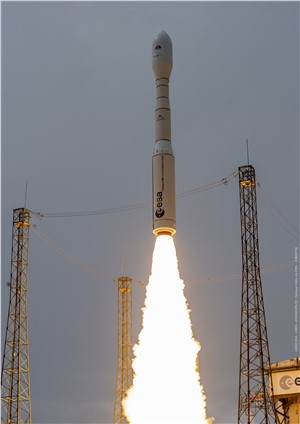 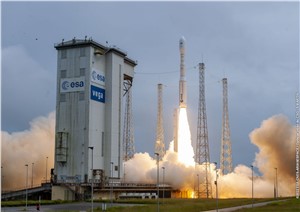 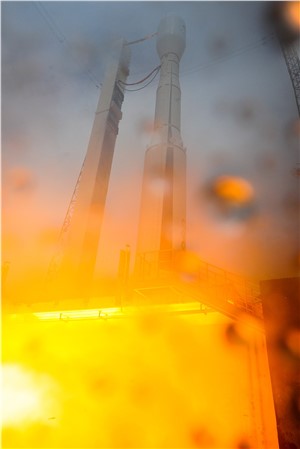 ESA’s new Vega-C rocket has completed its inaugural flight, placing main payload LARES-2 – a scientific mission of the Italian Space Agency ASI – into its planned orbit. Six research CubeSats from France, Italy and Slovenia flew as secondary payloads. The launch caps a multi-year effort by ESA, prime contractor Avio and industrial partners in 13 ESA member states to build on the heritage of its predecessor, Vega.

Total payload mass at liftoff was approximately 474kg: 296 kg for LARES-2, with the remainder being the six CubeSats, payload adapters and carrying structures.

Vega-C represents a dramatic capability boost compared to Vega, which has flown since 2012. With new first and second stages and an uprated fourth stage, Vega-C increases performance from Vega’s 1.5 t to about 2.3 t in a reference 700 km polar orbit.

Overseeing launch operations from mission control at the Spaceport, ESA Director of Space Transportation Daniel Neuenschwander remarked: “Today we open a new era of European launch solutions, starting with Vega-C and to be complemented by Ariane 6.”

Vega-C features a new, more powerful first stage, P120C, based on Vega’s P80. Atop that is a new second stage, Zefiro-40, and then the same Zefiro-9 third stage as used on Vega.

The re-ignitable upper stage is also improved. AVUM+ has increased liquid propellant capacity, to deliver payloads to multiple orbits depending on mission requirements and to allow for longer operational time in space, to enable extended missions.

The P120C motor will do double service, with either two or four units acting as strap-on boosters for Ariane 6. Sharing this component streamlines industrial efficiency and improves cost-effectiveness of both launchers.

The precise orbital path of LARES-2 will be tracked by laser, from ground stations. The purpose of the mission is to measure the so-called frame-dragging effect, a distortion of space-time caused by the rotation of a massive body such as Earth as predicted by Einstein’s General Theory of Relativity. Its predecessor, the similar LARES, was the main payload on the 2012 inaugural flight of Vega.

Six CubeSats made a secondary payload package. AstroBio CubeSat (Italy) will test a solution for detecting biomolecules in space. Greencube (Italy) carries an experiment to grow plants in microgravity. ALPHA (Italy) aims to help understand phenomena related to Earth’s magnetosphere, such as the Northern and Southern Lights.

Three other CubeSats – Trisat-R (Slovenia), MTCube-2 (France) and Celesta (France) will study the effects of a harsh radiation environment on electronic systems.

VV21 was operated by ESA, which owns the Vega-C programme and oversees its development. This inaugural flight paves the way for the start of exploitation by Arianespace and Avio.