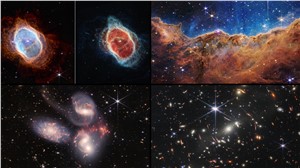 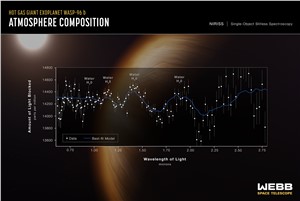 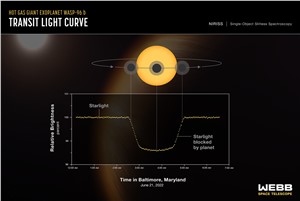 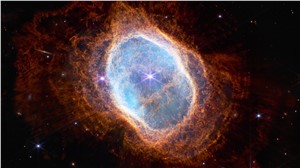 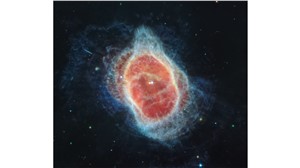 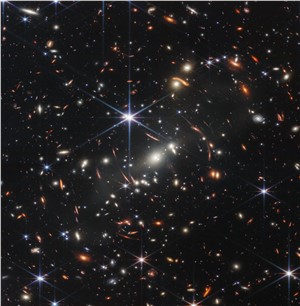 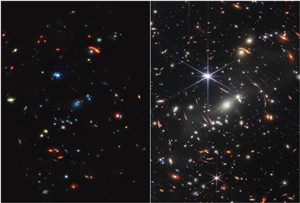 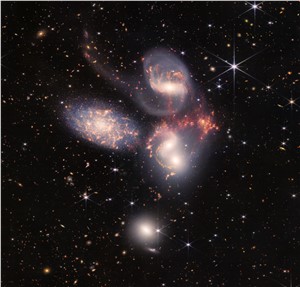 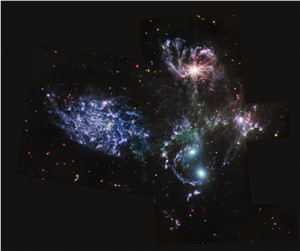 The dawn of a new era in astronomy has begun as the world gets its first look at the full capabilities of the NASA/ESA/CSA James Webb Space Telescope. The telescope’s first full-colour images and spectroscopic data, which uncover a spectacular collection of cosmic features that have remained elusive until now, were released today.

Webb’s first observations tell the story of the hidden Universe through every phase of cosmic history – from neighbouring exoplanets to the most distant observable galaxies in the early Universe, to everything in between.

"Today, we present humanity with a groundbreaking new view of the cosmos from the James Webb Space Telescope – a view the world has never seen before,” said NASA Administrator Bill Nelson. “These images, including the deepest infrared view of our Universe that has ever been taken, show us how Webb will help to uncover the answers to questions we don’t even yet know to ask; questions that will help us better understand our universe and humanity’s place within it.

“The Webb team’s incredible success is a reflection of what NASA does best. We take dreams and turn them into reality for the benefit of humanity. I can’t wait to see the discoveries that we uncover – the team is just getting started!”

“These first images and spectra from Webb are a huge celebration of the international collaboration that made this ambitious mission possible,” says Josef Aschbacher, ESA Director General. “I want to thank everyone involved with commissioning of this magnificent telescope and the delivery of these first incredible products from Webb for making this historic day a reality.”

Today’s images and spectra reveal the capabilities of all four of Webb’s state-of-the-art scientific instruments and confirm that the observations ahead will revolutionise our understanding of the cosmos and our own origins.

“This is the start of a new era viewing the Universe and making exciting scientific discoveries with Webb,” says Günther Hasinger, ESA’s Director of Science. “As we now begin regular science operations, I know the European astronomical community cannot wait to see the results of the observing time they have won for Webb's first year.”

“Working on this mission has been one of the biggest highlights and most rewarding parts of my career,” says Macarena Garcia Marin, MIRI ESA Instrument Scientist. “My colleagues and I are eager to see what Webb can do and what surprises await us with its unprecedented combination of sharpness and sensitivity.”

Webb’s first observations were selected by a group of representatives from NASA, ESA, CSA, and the Space Telescope Science Institute:

SMACS 0723:  Webb has delivered the deepest and sharpest infrared image of the distant Universe so far – and in only 12.5 hours. This new image, a colour composite of multiple exposures each about two hours long, is approximately the size of a grain of sand held at arm’s length. This deep field uses a lensing galaxy cluster to find some of the most distant galaxies ever detected. This image only scratches the surface of Webb’s capabilities in studying deep fields and tracing galaxies back to the beginning of cosmic time. Read more about this image

WASP-96b: Webb’s detailed observation of this hot, puffy planet outside our Solar System reveals the clear signature of water, along with evidence of haze and clouds that previous studies of this planet did not detect. With Webb’s first detection of water in the atmosphere of an exoplanet, it will now set out to study hundreds of other systems to understand what other planetary atmospheres are made of. Read more about this image

Southern Ring: This planetary nebula, an expanding cloud of gas that surrounds a dying star, is approximately 2,000 light years away. Here, Webb’s powerful infrared eyes bring a second dying star into full view for the first time. From birth to death as a planetary nebula, Webb can explore the expelling shells of dust and gas of aging stars that may one day become a new star or planet. Read more about this image

Stephan’s Quintet: Stars derive from, and contribute to, gas and dust in mass quantities, swirling around galaxies. The dust evolves over time and Webb can study nearby and dynamic interacting galaxies to see the dust in action. Now, scientists can get a rare look, in unprecedented detail, at how interacting galaxies are triggering star formation in each other and how the gas in these galaxies is being disturbed. Read more about this image

Carina Nebula: Webb’s look at the ‘Cosmic Cliffs’ in the Carina Nebula unveils the earliest, rapid phases of star formation that were previously hidden. Looking at this star-forming region in the southern constellation Carina, as well as others like it, Webb can see newly forming stars and study the gas and dust that made them. Read more about this image

The release of Webb’s first images and spectra kicks off the beginning of Webb’s science operations, where astronomers around the world will have their chance to observe anything from objects within our Solar System to the early Universe using Webb’s four instruments.

The James Webb Space Telescope launched on 25 December 2021, on an Ariane 5 rocket from Europe’s Spaceport in French Guiana, South America. After completing the most complex and difficult deployment sequence in space, Webb underwent months of commissioning where its mirrors were painstakingly aligned, and its instruments were calibrated to its space environment and prepared for science.