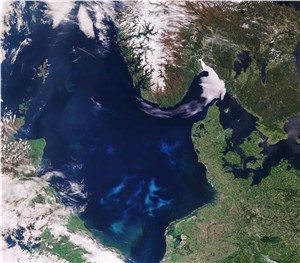 Kongsberg Defence & Aerospace (KONGSBERG) has signed a contract with the European Space Agency (ESA) to start a feasibility study on building a national satellite infrastructure for ocean surveillance.

In collaboration with the Norwegian Maritime Authority, The Norwegian Space Agency (NoSA) will facilitate the development of a constellation of national micro-satellites for maritime surveillance - Arctic Ocean Surveillance Constellation (AOS) - delivered and operated by Norwegian actors.

The goal is to develop national suitability for space-based maritime surveillance capacity. The first part of the development of AOS will be carried out as a Norwegian industrial project in ESA. The goal of the ESA-project is to develop the Norwegian space industry across the entire value chain.

KONGSBERG has signed a contract with ESA for a feasibility study for AOS. The feasibility study is the first phase in the AOS project and alongside other studies, it will form the basis for an announcement in open competition for the realization of AOS. KONGSBERG will involve the Norwegian Defense Research Establishment (FFI) and other Norwegian industrial aerospace actors in the implementation of the feasibility study.

"The AOS study will build on the collaboration with FFI, Seatex, EIDEL and Kongsberg Satellite Services (KSAT) connected to the realization of the three satellites Kongsberg Defence & Aerospace already have invested in. With an increased number of satellites and with other sensors in addition to the navigation radar detector and AIS, the AOS constellation will further strengthen the monitoring of national interests in the High North," says Aage Sørensen, Senior System Engineer for Emerging Products in KONGSBERG.

By this, KONGSBERG takes a leading position in the development of a complete national industrial value chain for space-based infrastructure and services for small satellites and a Norwegian internationally competitive space industry.