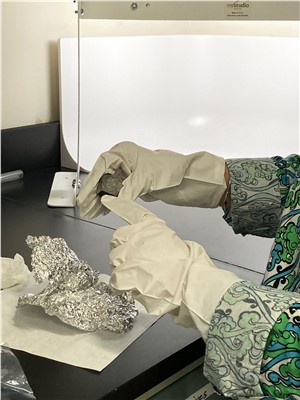 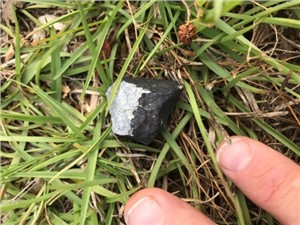 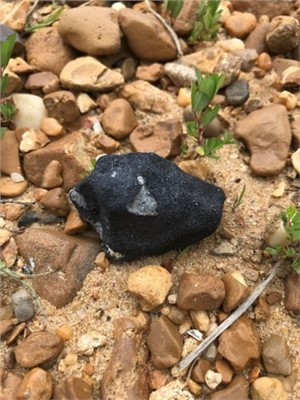 NASA cosmic dust curator Marc Fries has been locating and documenting meteorite falls for 13 years but until now had never actually recovered a meteorite – and technically his wife, Linda, found one two hours earlier.

Part of Fries’ work in the Astromaterials Research and Exploration Science (ARES) division at NASA’s Johnson Space Center in Houston is using publicly available data like weather radar imagery, seismometers, eyewitness accounts and NASA’s Meteorite Falls website to locate these cosmic artifacts. But it took nine meteorite fall visits for him to actually find a meteorite.

“I've been to over a half dozen of these sites and found several dozen on radar — and I had never actually found a meteorite in person,” Fries said. “At falls in the past, I’ve been within 20 feet from somebody else as they find a meteorite.”

But this time, the stars — or, rather, Fries’ work schedule and the meteorological data — aligned to offer a career highlight as meteorites rained to the ground on April 27, 2022, near Natchez, Mississippi.

“That was kind of a break from the normal because these things have the uncanny habit of happening when I’m usually overseas or at a meeting somewhere and can’t get away,” Fries said.

This latest meteorite fall heralded its arrival as a daytime fireball at 8:03 a.m. local time, with 60 eyewitnesses from Mississippi and surrounding states ultimately reporting it to the American Meteor Society. There were also reports of sonic booms, an indicator that the event was large enough to produce meteorites.

In the weeks following, more than 20 meteorites ranging from less than one gram to almost 200 grams have been picked up. Fries’ wife, Linda Welzenbach Fries – also a geologist in planetary materials curation at Rice University in Houston – was technically the first to recover a meteorite at 2:45 p.m. April 30. About two hours later, Fries found one.

The true winner, however, is the scientific research community, as these early finds have the distinction of being extremely fresh finds – minimizing contamination by Earth’s atmosphere, rain contact with materials on the ground, and other damage from weather thanks to their speedy recovery making them part of a very small subset of meteorites with minimal contamination.

“The real scientific value in these meteorites is that we pick them up within a couple days of them landing,” Fries said. With meteorite falls like the one near Natchez, “weather radar has the almost magical property of telling you exactly where meteorites landed,” Fries said. “On Friday I pulled up the weather radars with the correct time and there was this meteorite fall, bigger than Christmas and hard to miss. This is one of the most beautiful ones that I’ve seen in radar data. There are signatures that you look for that indicate a meteorite fall, and they were just all there.”

It was a no-brainer for husband-wife duo to make the five-hour drive. “This is Texas — that’s like going to the mailbox,” Marc quipped. They scoured the calculated field for strewn debris. Looking for meteorites may not be something many married couples do, but for this duo, it was the perfect way to spend a weekend.

“This is far from her first rodeo as far as meteorites go,” Fries said of Welzenbach Fries, who used to be a collection manager for the Smithsonian Meteorite Collection. Now a doctoral student and science communicator at Rice, it’s easy to see why she, like Fries, is emotionally invested in the hunt for these kinds of geological wonders — especially after finding her first meteorite.

Preliminary examination indicates that the meteorites gathered appear to be two different types of ordinary chondrites that were mixed together on the surface of an asteroid, known as regolith breccia. Soon, ARES will do more analyses and scans using X-ray Computed Tomography, which will allow researchers to peer inside the interiors of the rocks without ever breaking them open, and complete 3D renderings. One sample will eventually be sectioned into thin slices for loan to the scientific community so that researchers can complete their own investigations.

As the agency extends its reach to the Moon with the Artemis program, with each new meteorite fall event NASA learns more about the origins of the universe and how to enable human excursions in deep space. Our galaxy provides infinite opportunities for surprises, which Fries said he appreciates.

“Every single body we’ve ever visited, every single mission we’ve ever flown, we have come across something we didn’t expect,” Fries said. “That part of it is philosophically the part that I enjoy — that I look forward to the most in any mission — coming across the thing that we didn’t see coming. It’s always fascinating.”

And whether astronauts are venturing further out in the solar system or the show is coming to us in the form of meteorites peppering Earth at supersonic speeds, there’s always more to discover.