ESA Pursues a Shared European Vision for the Future of Space 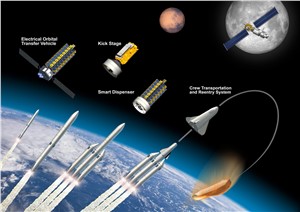 As the European Space Agency prepares to begin operations of its next-generation Vega-C and Ariane 6 launch systems complemented by the reusable Space Rider orbital transportation system, work is underway to define the future of European space transportation capabilities for the coming decade and beyond.

ESA, together with partners, is elaborating a vision of the future of space transportation in Europe. The objective is to identify the activities required to unleash Europe’s technological potential as a global competitor, with an industrial landscape that fosters innovation and drives cost reduction.

Identifying critical technologies is a key feature of this approach.

Work has been underway since summer 2021 to identify features of a future European space transportation infrastructure. The next phase will be to define a technology roadmap that allows ESA, Europe’s national space agencies and institutions, and both established and start-up space companies to match the intense technical and commercial competition coming from the USA, China, Russia and India.

More than 100 representatives of Europe’s space sector are preparing to gather on 28 June in Palermo, Sicily for an intensive series of roundtable discussions.

Critically, he says, concepts for a “Vision 2030+” must be discussed independently of the needs and constraints of existing programmatic frameworks. “We need to think about the future without being held back by the parameters of today,” he says.

Encouragingly, he adds, work done so far has been supported by technical experts from institutions of ESA’s Member States: “There are elements for a vision of the future from the technical and technological perspective.”

One key focus of the Palermo meeting is to share ESA’s Vision 2030+ with industry and consolidate a technology development strategy, because it is important to define coordinated actions by Europe’s institutions and companies. 2030, he notes, is coming soon – it is the “next step, not the step after the next”.

Following the Space Summit held in Toulouse in February 2022, another focus is to share the steps ESA is taking to prepare an informed decision on human exploration, including human space transportation capabilities in Europe, as these may become an additional dimension of Vision 2030+. At Palermo, discussions will grapple with the question of competition versus cooperation between institutional and private-sector actors spread across many European countries.

ESA, its national partners and other European institutions which rely on space services may also need to redefine their roles. Going from being project leaders – the traditional role of a space agency – to project enablers means learning to work with private sector actors and their objectives, rather than hiring them to fulfil a specified mission.

That new role may see agencies work to de-risk ambitious technology development efforts to smooth the path from concept to reality. Agencies may also need to act as “anchor customers” to ensure a coordinated European procurement of end-services by, for example, guaranteeing a minimum yearly order.

In that context, Tumino says, an important objective of the Palermo gathering will be to identify where to focus resources for the best return on investment.

Daniel Neuenschwander, ESA’s Director of Space Transportation, says the event in Palermo will be a unique opportunity to share objectives and work with European stakeholders to further elaborate Vision 2030+ in preparation for November’s ESA Council at Ministerial Level. “Our objective is to identify the paths we need to follow to unleash European technological potential and position Europe as a key space power in a competitive global space sector,” he says.

Tell a friend:
ESA Pursues a Shared European Vision for the Future of Space Transportation