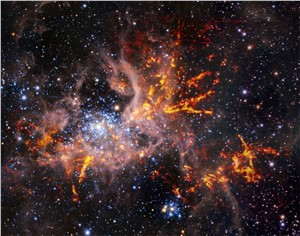 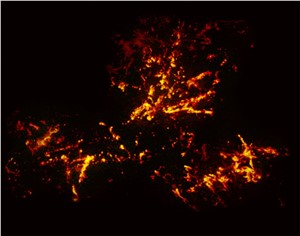 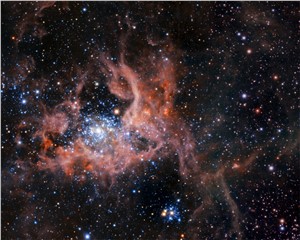 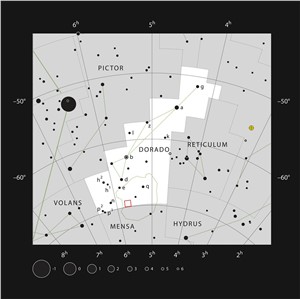 Astronomers have unveiled intricate details of the star-forming region 30 Doradus, also known as the Tarantula Nebula, using new observations from the Atacama Large Millimeter/submillimeter Array (ALMA). In a high-resolution image released today by the European Southern Observatory (ESO) and including ALMA data, we see the nebula in a new light, with wispy gas clouds that provide insight into how massive stars shape this region.

“These fragments may be the remains of once-larger clouds that have been shredded by the enormous energy being released by young and massive stars, a process dubbed feedback,” says Tony Wong, who led the research on 30 Doradus presented today at the American Astronomical Society (AAS) meeting and published in The Astrophysical Journal. Astronomers originally thought the gas in these areas would be too sparse and too overwhelmed by this turbulent feedback for gravity to pull it together to form new stars. But the new data also reveal much denser filaments where gravity’s role is still significant. “Our results imply that even in the presence of very strong feedback, gravity can exert a strong influence and lead to a continuation of star formation,” adds Wong, who is a professor at the University of Illinois at Urbana-Champaign, USA.

Located in the Large Magellanic Cloud, a satellite galaxy of our own Milky Way, the Tarantula Nebula is one of the brightest and most active star-forming regions in our galactic neighbourhood, lying about 170 000 light-years away from Earth. At its heart are some of the most massive stars known, a few with more than 150 times the mass of our Sun, making the region perfect for studying how gas clouds collapse under gravity to form new stars.

"What makes 30 Doradus unique is that it is close enough for us to study in detail how stars are forming, and yet its properties are similar to those found in very distant galaxies, when the Universe was young,” said Guido De Marchi, a scientist at the European Space Agency (ESA) and a co-author of the paper presenting the new research. “Thanks to 30 Doradus, we can study how stars used to form 10 billion years ago when most stars were born."

While most of the previous studies of the Tarantula Nebula have focused on its centre, astronomers have long known that massive star formation is happening elsewhere too. To better understand this process, the team conducted high-resolution observations covering a large region of the nebula. Using ALMA, they measured the emission of light from carbon monoxide gas. This allowed them to map the large, cold gas clouds in the nebula that collapse to give birth to new stars — and how they change as huge amounts of energy are released by those young stars.

“We were expecting to find that parts of the cloud closest to the young massive stars would show the clearest signs of gravity being overwhelmed by feedback,” says Wong. “We found instead that gravity is still important in these feedback-exposed regions — at least for parts of the cloud that are sufficiently dense.”

In the image released today by ESO, we see the new ALMA data overlaid on a previous infrared image of the same region that shows bright stars and light pinkish clouds of hot gas, taken with ESO’s Very Large Telescope (VLT) and ESO’s Visible and Infrared Survey Telescope for Astronomy (VISTA). The composition shows the distinct, web-like shape of the Tarantula Nebula’s gas clouds that gave rise to its spidery name. The new ALMA data comprise the bright red-yellow streaks in the image: very cold and dense gas that could one day collapse and form stars.

The new research contains detailed clues about how gravity behaves in the Tarantula Nebula’s star-forming regions, but the work is far from finished. “There is still much more to do with this fantastic data set, and we are releasing it publicly to encourage other researchers to conduct new investigations,” Wong concludes.