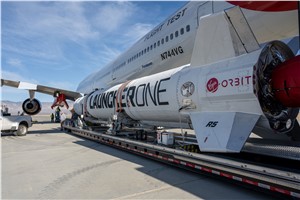 Satellite launch company Virgin Orbit (Nasdaq: VORB) announces today that a joint mission between the United Kingdom’s Defense Science and Technology Laboratory and the United States Naval Research Laboratory (NRL) is expected to be lofted on the first space launch out of Spaceport Cornwall later this year.

The government agencies’ joint Coordinated Ionospheric Reconstruction CubeSat Experiment (CIRCE) is supported by the U.S. Department of Defense’s Space Test Program (STP), which is organized under the U.S. Space Force’s Space Systems Command (SSC). CIRCE will utilize two 6U CubeSats flying in tandem formation to measure the ionosphere and radiation environment from multiple vantage points. The mission will support the two countries’ joint development of a wide range of civil and defense applications, including GPS, radar, communication systems, and sensing technology.

CIRCE will fly alongside other previously announced international commercial customers. In addition, the flight will feature the first Welsh-built satellite supplied by U.K. in-orbit manufacturing start up Space Forge, an earth observation satellite supplied through a joint project with Horizon Technologies and The Catapult – the United Kingdom’s space-tech accelerator, as well as the Kingdom of Oman’s first ever satellite.

Virgin Orbit’s first overseas flight is expected to be the launcher’s fifth consecutive mission carrying commercial and government customers since it began operations in 2021. Virgin Orbit has successfully launched eight previous STP satellites to orbit, demonstrating its ability to launch from any airport with a spaceport certificate.

“We are honored to host this joint mission between the U.S. and U.K. Governments on the launch from Cornwall,” said Virgin Orbit CEO Dan Hart. “This demonstration, chosen to fly on the United Kingdom’s first space launch from its territory, exhibits the powerful value of collaboration between our two countries and their mutual commitment to delivering the full value of space access for all.”

“We couldn’t be more excited to work with our U.K. and U.S. mission partners to execute this mission, which would achieve milestones across multiple fronts,” said Mark Baird, Virgin Orbit National Systems’ President. “We look forward to continuing to accelerate the operationalization of our capabilities with this mission and providing space access from non-traditional locations—a fundamental facet of our mission to provide a broader space capability.”

“The NRL CIRCE Team is thrilled to be a part of this joint US/UK mission,” said Andrew Nicholas, a principal investigator with the NRL’s CIRCE team. “We look forward to a successful launch out of Spaceport Cornwall and are excited to continue work with our UK partners once the CIRCE science data starts flowing.”

“The CIRCE space weather experiment will join a host of small satellites on board Virgin Orbit’s first launch from the UK, and it’s exciting to see the wide range of commercial, academic and government partners who will share this moment with us,” said Dr. Paul Bate, CEO of the UK Space Agency. “We are on track to meet our ambition of becoming the first country to offer commercial launch services from Europe, catalysing investment into our growing space sector and creating hundreds of new jobs. I can’t wait to see Cosmic Girl take to the skies above Spaceport Cornwall later this year.”

“Defence science and technological activity in space has never been more important, whether it is in support of military operations or helping to combat climate change, defence innovation is at the forefront of this work,” said Air Vice-Marshall Paul Godfrey, Commander of UK Space Command. “After it enters orbit from Spaceport Cornwall, CIRCE will enhance our understanding of space weather and help us to keep critical satellites safe from the many hazards associated with operating in space.”

“The countdown to Virgin Orbit’s first launch from Spaceport Cornwall is on, and it’s excellent to have another pair of satellites confirmed for the mission,” said George Freeman, UK Minister for Science, Research & Innovation. “This is a strong demonstration of the close ties between the U.K. and U.S. as we pioneer new and innovative satellite technologies and build global interest in Britain’s emerging launch capabilities.”

“It’s an honour that UK and US partnerships are to be launched from Cornwall and we are proud to support the facilitation of these international milestones,” said Melissa Thorpe, Head of Spaceport Cornwall. “The mission aligns with Spaceport Cornwall’s delivery of ‘space for good,’ by bringing together partners from across the planet in a shared mission to support space-to-planet communications and applications to benefit humanity.”

Tell a friend:
UK and US to Launch Joint Mission Aboard UK's 1st Orbital Launch Supported by Virgin Orbit