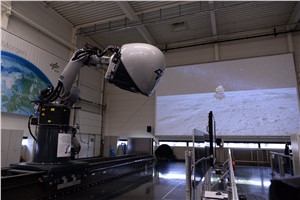 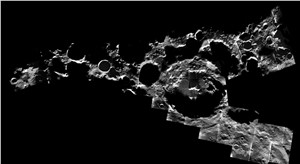 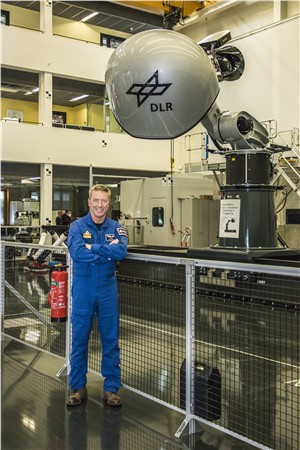 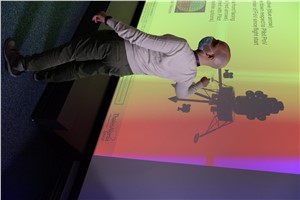 As part of the project, Roberto Vittori – a veteran astronaut of three space flights – boarded a unique motion simulator based at the German Aerospace Center (Deutsches Zentrum für Luft- und Raumfahrt; DLR) Institute of System Dynamics and Control at Oberpfaffenhofen near Cologne, designed for extreme tilt angles and manoeuvres.

“It was a beautiful run,” said Roberto, stressing the intuitive feeling for motion the simulation system gave him.

“The simulator is an incredible machine, probably one of the best I have experienced. This experiment today is for me showing that Europe can play a key role in the future of exploration.”

The DLR Robotic Motion Simulator is based on an industrial robot arm with a flight deck capsule attached to it, fitted in turn with a virtual flight deck window

From the capsule, Roberto was able to experience how a spacecraft behaves during critical flight phases then take action to control it. In one test scenario, the auto pilot was set to land in a landing zone littered with boulders. Vittori was able to intervene within a given time window and select a safer alternative landing site via touch screens.

In another scenario, the autopilot experienced a technical fault. Here, the Italian astronaut was able to switch to fully manual control and pilot the module manually as it descended onto the lunar surface.

“Our primary goal has been to evaluate human-machine interfaces and assistance functions for spacecraft,” explains ESA project manager Luca Ferracina.

“We’re establishing a preliminary design and the preliminary requirements for human lunar landing, with astronauts in the loop to improve robustness and reliability of the flight system. Our experience here shows clearly that the DLR Robotic Motion Simulator is very suitable for conducting this type of test.”

Forward to the Lunar Gateway
ESA’s ‘Human-In-the-Loop Flight Vehicle Engineering for Exploration Missions’ project is as part of its preparations for the international Lunar Gateway space station. Among other things, the Gateway is to serve as an intermediate station for crewed missions to the Moon.

Once the Gateway is established as a basecamp for surface exploration, the Moon’s South Pole is high on the list of sites to visit, and eventually settle. Avoiding the crippling temperature found elsewhere on the Moon, this location offers near-continuous sunlight for solar power along with access to lunar water ice deposits in adjacent permanently-shadowed craters.

The project is funded by ESA and is a collaboration between research and industry. Project partner Thales Alenia Space from Italy provided user interfaces for manoeuvre control, including touch screen software. The navigation and flight control of the simulated lunar module was developed by Spanish company GMV and adapted for the DLR simulator.