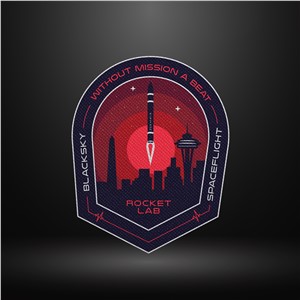 Electron is scheduled to launch the “Without Mission A Beat” mission from Rocket Lab Launch Complex 1 in New Zealand during a launch window that opens February 4, 2022 UTC. The “Without Mission A Beat” launch will be the fifth and sixth satellites delivered to space for BlackSky by Rocket Lab in the past three months. This dedicated mission will be Rocket Lab’s 24th Electron launch and first mission of 2022. Rocket Lab will not be attempting to recover Electron for this mission.

While this next mission was due to be the final launch in a series of back-to-back missions for the company as part of a multi-launch deal actioned last year, Spaceflight has since commissioned an additional sixth launch for BlackSky on Electron to take place in 2022. That dedicated mission will continue BlackSky’s rapid business expansion by deploying another pair of Gen-2 Earth-imaging satellites to a precise location in low Earth orbit for its growing satellite constellation.

Rocket Lab CEO Peter Beck says: “This next mission is part of the largest number of satellites BlackSky have committed in a single deal to a launch provider, and we’re proud to be their trusted partner to help grow their constellation. BlackSky adding another mission to the Rocket Lab manifest is further confirmation of Electron’s status as the dedicated small launch champion, and we’re ready and eager to deliver these missions for BlackSky in the weeks to come.”

These upcoming BlackSky missions begin a busy year of Electron launches for Rocket Lab, including more bulk dedicated launches for government and commercial satellite operators, other singular dedicated and rideshare missions, and Rocket Lab’s mission to the Moon for NASA on the upcoming CAPSTONE mission scheduled to launch from New Zealand in the first half of the year.